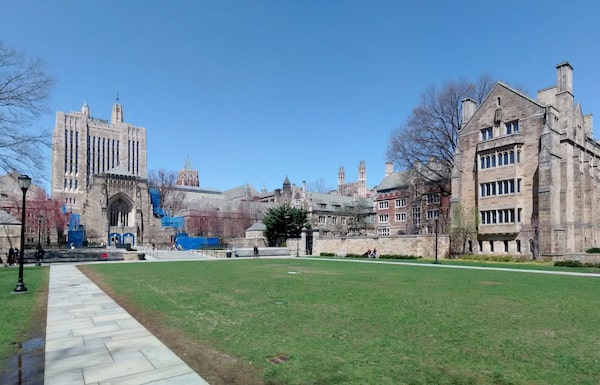 New Haven, a coastal city on the northern shore of Long Island Sound, is home to Yale University. The iconic places to run in New Haven include the Yale campus, East Rock, pretty residential streets, and a section of the Farmington Canal Heritage Trail. There’s also some great waterfront running as well. Though unfortunately cut off from central New Haven by the I-95/I-91 tangle, it’s wonderful once you’re there.

New Haven Green and Yale Campus. New Haven was the first ‘planned city’ in America, and the 16-acre New Haven Green is a National Historical Landmark. Cross College St. and run around the campus of Yale, which has fine running on numerous paths, bordered by Grove St. and Chapel St. Be sure to run Old Campus, Cross Campus, Beinecke Plaza, and Hillhouse. Overall, you can put together 3-4 miles here. For more, run down Whitney toward East Rock or the Farmington Canal Trail. The Yale campus was designed by Frederick Law Olmsted.  Campus Map.

East Rock. This is the running highlight of New Haven. A 2.5 mile switchback-ey road leads to the summit, which has great views. Total ascent is 750 feet, with some steep sections. Trail runners might venture onto some of the paths. East Rock is a little over 1 mile from Yale/New Haven Green (use Orange Ave. or Whitney Ave.). Route Map.

Nice Streets & Neighborhoods. New Haven has some lovely streets with older Victorian homes and interesting architecture. A really nice area includes some of the roads from the Yale Campus heading east: Whitney, Hillhouse, Orange, Temple, Prospect, and side streets. We also love running in Hamden, an affluent suburb north of New Haven. Ridge Rd. is a nice straight shot that goes for miles, with gorgeous, set back homes. The quieter streets off Whitney Ave. are also good for running.

Farmington Canal Heritage Trail. This 54-mile trail starts in New Haven, and heads north to the Massachusetts border and beyond. It’s the best off-road running option in New Haven. A good 4-miler is to start at the trail head off Temple St. (near Yale Campus), and run for 2 miles to Morse St. Trail Map

Some of our favorite runs in New Haven, CT