No Thanks
New Haven, CT 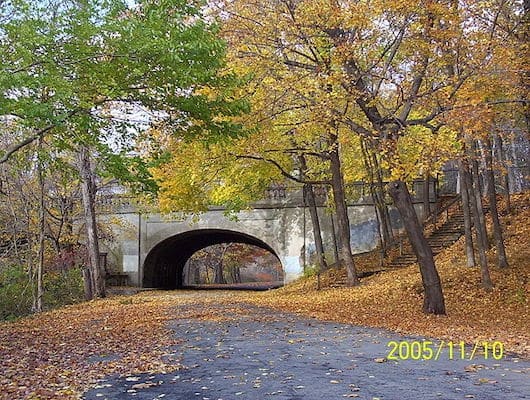 In the western part of New Haven, there are some nice parks for running. Best among them is Edgewood Park, which has a trail that’s ~1 mile from end-to-end. The park also houses Yale’s athletic fields, a running track, and the Yale Bowl stadium (good for stair repeats!). For a longer run, Edgewood Park is  1.2 miles west of the Yale campus using Chapel St. or Edgewood Ave. So it would be a nice 4-5 miler!

West Rock Ridge State Park: Just north of Edgewood Park. Get some hills in by running the to the 627-foot summit, which features great views of New Haven Harbor and Long Island Sound (note: no shoulder, but not too many cars). There are also several miles of trails that are wonderful for trail running — various levels of difficulty. See this TRAIL MAP

East Rock Park is one of the running highlights of New Haven. A 2.5 mile switchback-ey road... more...

The Prospect Hill Historic District and the residential streets northeast of the Yale campus are a treat... more...