See Also Our Guides to Maine-South Coast and Maine-Mid Coast! 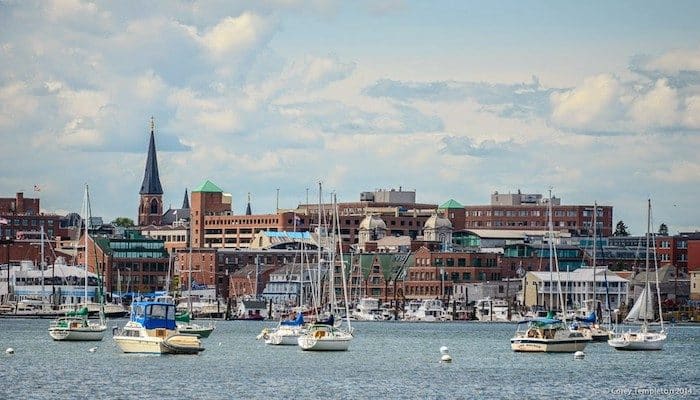 Lobsters, lighthouse, and ocean— the things that come to mind when you think about Maine’s largest city. Portland is one the few working waterfronts left in the United States, acting as New England’s largest tonnage seaport and second largest fishing port. The city is located on a peninsula in Casco Bay with access to many islands. Tourists flock to the city to visit the historic Old Port, the Arts District, and the Portland Head Light, located in nearby Cape Elizabeth. Portland is known for its hip culture, with a mixture of arts, outdoor activities, fashion, and amazing culinary scene. This is our guide to running in Portland, Maine.

The best places to run in Portland, Maine center on the waterfront. The Eastern Promenade and Back Cove are the must-dos from downtown. The Harborwalk is a great way to explore east and south Portland, and a lighthouse, while Cape Elizabeth features Portland’s swankiest real-estate and some lovely running. Our runs in the downtown and southern Portland areas can be standalone or easily mixed and matched. For more, see our extensive guides to the Southern Coast and Mid-Coast. Also, Portland Trails has excellent information, maps, and updates on 70+ miles of trails in the area. Winter note: Eastern Promenade, Back Cove, Fore River Parkway, and Bayside Trailsare cleared of snow by the City of Portland.

This is a fairly small city with a compact downtown. Central Portland is a peninsula inside of I-295 and has many of the city’s commercial highlights. Cross the Casco Bay Bridge to get to South Portland and Portland Head Light. Cape Elizabeth is 8 miles south of downtown.

Some of our favorite runs in Portland, Maine 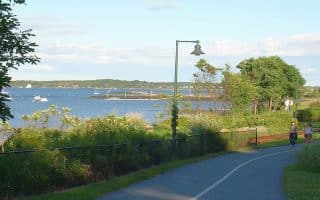 Along the Water | Iconic | Multi-Use Trails | Olmsted | Rails-to-Trails | Seaside Promenades
One of Portland’s centerpieces, running from downtown, along the water, to Back Cove. The waterfront trail is built along an old rail corridor and offers spectacular harbor and ocean views.
Explore 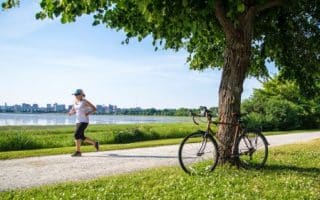 Along the Water | Multi-Use Trails | Rails-to-Trails
One of the most popular trails in Portland. Amazing views of the Portland skyline, with water views for the entire 3.5 mile loop around this nearly circular estuary basin on the northern side of the City of Portland.
Explore 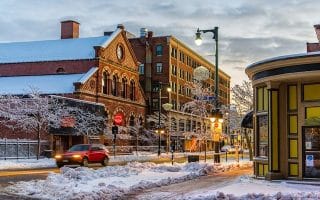 Historic / Tourist
Stretching 5 miles from Portland’s southwestern border through a number of neighborhoods before ending overlooking the Eastern Promenade on Munjoy Hill. A good way to anchor a run in Portland.
Explore 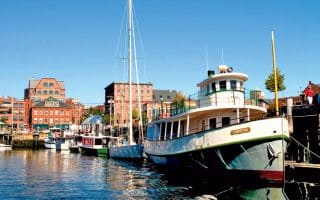 Historic / Tourist
This is a nice tour of Portland’s Old Port main downtown area. Old Port is one of the most successful revitalized warehouse districts in the country.
Explore 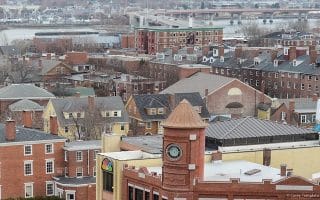 Historic / Tourist | Parks
A lovely run through the West End neighborhood, famous for its architecture and boasts some of Portland’s largest historic homes including the historic Victoria Mansion museum.
Explore 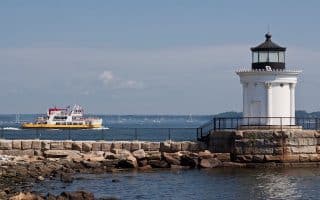 Along the Water | By the Beach | Historic / Tourist
A ‘tour de Portland’, connecting Portland’s East End beach and South Portland’s Bug Light Park.There are water views and a dedicated path most of the way.
Explore 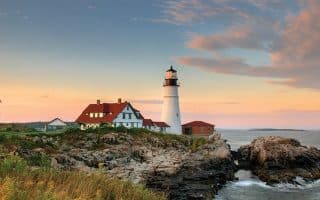 Along the Water | Gorgeous Residential | Iconic | Fantastic Neighborhoods
Cape Elizabeth is Portland’s most affluent suburb, with lovely waterfront sections and pretty residential streets. This is the route of the 10k Beach to Beacon road race. Options to vary from this.
Explore 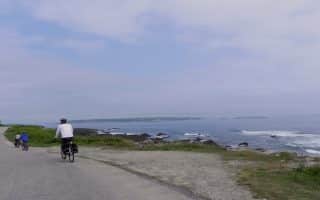 Along the Water
Take the 20-minute ferry over to Peaks Island, and enjoy a wonderful 4-mile perimeter tour of the island, with great water and Portland skyline views.
Explore 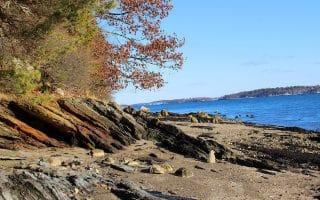 Along the Water
A great loop starting at Back Cove, Portland, crossing the Presumpscot River, and doing a quick tour of the island, with its rocky shore.
Explore 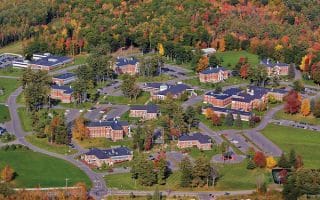 Great Views | Trail Running
This 5,000 acre working farm located 18 miles northwest of Portland is a great place for a destination run. 30 km of trails, with a wonderful combination of woods, fields, and farm buildings, on rolling terrain. Open dawn to dusk, no fee required!
Explore 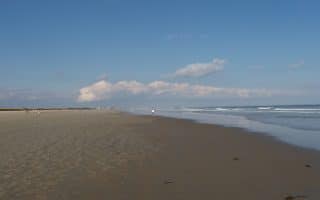 Along the Water | By the Beach
There are no really long beaches for running right in Portland. But two of Maine’s fabulous running beaches -- Old Orchard Beach & Ogunquit Beach are 1/2 hr. away. Here's our guide.
Explore 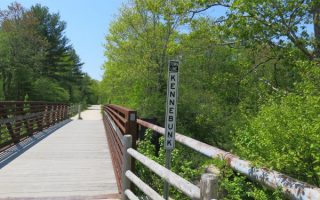 Multi-Use Trails | Rails-to-Trails
Wonderful off-road running between Portsmouth and Portland. 30% of the 65-mile trail is complete. Mainly inland, through woods, marshes, & farms. Brochure, with detailed maps, is a great resource for good roads for running in the area as well.
Explore

Along the Water | Iconic | Multi-Use Trails | Olmsted | Rails-to-Trails | Seaside Promenades
One of Portland’s centerpieces, running from downtown, along the water, to Back Cove. The waterfront trail is built along an old rail corridor and offers spectacular harbor and ocean views.
Explore

Along the Water | Gorgeous Residential | Iconic | Fantastic Neighborhoods
Cape Elizabeth is Portland’s most affluent suburb, with lovely waterfront sections and pretty residential streets. This is the route of the 10k Beach to Beacon road race. Options to vary from this.
Explore Portland is a northern city whose climate is influenced by the ocean. Summers are mild and pleasant, with high temperatures averaging near 80F (26C). It can get humid. Winters are very cold, but somewhat moderated by the ocean, compared to interior and northern parts of Maine. Average January highs are near freezing with lows 13F. Portland receives about 60 inches of snow a year, so snow-covered and icy roads and paths are a factor in winter. Annual precipitation averages 47.2 inches, copious year round, but the summers tend to be slightly drier. Fall is gorgeous and hangs on till the end of October.

From hotels to B&Bs to lodges and cabins, Portland has something to accommodate everyone. To ensure the stay of your choice, it’s recommend that you make reservations in advance. Room availability can be limited, especially during the peak summer and fall seasons, and in the Old Port and downtown areas. If you want to be right near the running trails, look in the Back Cove neighborhood, which is bordered by the trails and Baxter Boulevard. Looking for quick access to downtown? Bayside is a centrally-located neighborhood with easy access to the heart of the city. If waterfront views are your thing, check out Munjoy Hill. It is on the eastern edge of the Portland peninsula overlooking Casco Bay and encompasses the Eastern Promenade, a scenic waterfront park with a small beach and bike path. For more information on where to stay, click here.

RunWESTIN™: The Westin Portland Harborview Hotel has running concierges, who lead guided group runs every Tuesday and Thursday at 6:30 am (weather permitting) from their lobby. Runners of all levels are welcome.

Maine Track Club: Don’t be fooled by their name, they’re much more than track, in fact a lot of their runs are on roads! Founded in 1979, the nonprofit Maine Track Club is Maine’s largest and most active running club. They have several individual clubs that meet in and around Portland. They also hold races every month [Event Calendar]

Maine Coast Marathon & Half-Marathon: Experience the coast and enjoy the beauty of springtime in Maine as you run along the coast in Kennebunk, Kennebunkport and Biddeford Pool. Do all that while running for a great cause: the Shipyard Maine Coast Half Marathon benefits Southern Maine Health Care’s Center for Breast Care. The half marathon is a relatively flat course that winds through coastline and coastal towns like Biddeford. The race start and finish is at University of New England. The Maine Coast Marathon is a USATF certified course which makes it an eligible Boston Qualifier course. It rolls through Kennebunk, Kennebunkport, Goose Rocks & Fortune Rocks Beach.

Maine Marathon: Held in October, the Maine Marathon features a moderately hilly out-and-back course for all three races — marathon, relay and half marathon. It starts and finishes along the beautiful inner bay, Back Cove. Proceeds from this year’s race will go to benefit the Dream Factory of Maine,which grants dreams to critically and chronically ill children from ages 3–18.