No Thanks
Lousiville, KY 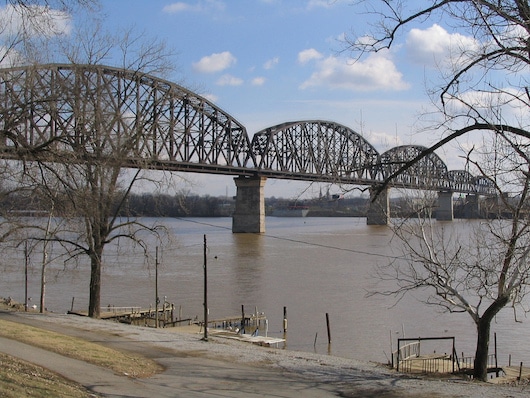 The area along the Ohio River is much improved in recent years. It is now possible to stitch together a pretty nice run along a series of waterfront paths and through numerous parks. There’s even a dedicated pedestrian/bike bridge, The Big Four Bridge, which itself is a spectacular two mile jaunt over the Ohio between Kentucky and Indiana.

There are numerous options for running along the Ohio River. On the Ohio side, the path is a bit over 7 miles from the western end at Lannan Memorial Park to the eastern end at Patriots Peace Memorial/Caperton Swan Park.  It’s a fairly seamless path, mostly pleasant but with a few less attractive sections. A good departure point is centrally located Waterfront Park.

Louisville Riverwalk EAST From Waterfront Park.  0.4 mile to the Big Four Bridge and 1.0 miles to Thurston Park. Then you’re along River Rd. (which has a side path), passing the historic, neoclassical Louisville  Water Tower, to the 2.8 mile mark at Zorn Rd. You can run all the way to the Patriots Peace Memorial/Caperton Swan Park, at 4.2 miles, through Cox Park, which has a Tree-Membrance Grove and a lovely walking path.

Indiana Side. Over the Big Four Bridge to Indiana is 2 miles one way. Once on the Indiana side in Jeffersonville, there’s about 1.7 miles along the river, from Ohio State Park in the west to the end of Ohio River Scenic Byway. It’s a combination of path and road sections along the Ohio River Scenic Byway. A nice add-on here is Perrin Family Park, features a 1.25 mile paved walking trail that passes near the lake and waterfowl feeding station which meanders its way through trees and open areas.

Two adjoining OImsted-designed parks, with designated 'scenic trails' through their centers. Among the best spots in Louisville... more...