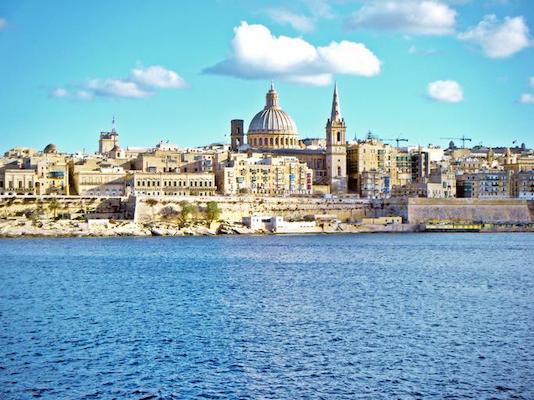 This is a ‘runseeing’ tour of Valletta, the capital of Malta —  a small walled city established on a peninsula in the 1500s. There are a few ways of seeing Valletta on foot, which can be combined in various ways. The heart of the city is inside Great Siege Rd. Inside the old city walls it’s largely pedestrianized. Note: the old city has narrow streets and can get crowded — good to go early!

Waterfront Route Outside The City Walls. There’s a~5 km of waterfront running in Valletta, below the city walls on the west and east sides of the peninsula. Basically, stay on the combination road/waterfront path: on the east side, it’s along Quarry Wharf to the St. Elmo’s Bridge path, out to the Breakwater Pier, and then loop around to the west side, following Boat St., as far as the Sliema Ferry terminal.

Inside the City Walls. Start at Triton Fountain, and run through the City Gate. Then, do the short section along the Hastings Garden, a park on top of the city walls, and then create your own route through the Old City. Use Republic St. as the anchor, which will take you by the important sites of Saint-John’s Cathedral, St. George’s Square, Grandmaster Palace, Republic Square, and the Casa Rocca Piccola palace, ending at St. Elmo Heritage building. It’s 1.6 km from Triton Fountain through the old city to St. Elmo. Here, you can run on additional streets in the old city or join the waterfront paths.

Combo Route: Our mapped 9.2 km route does a straight shot through the Old City, then the east side waterfront (lower Quarry Wharh and upper Gardens), then looping around to the west side along Boat St.

Add-Ons: Enjoy the waterfront promenade, which starts at Sa Maison Ferry Terminal and heads north for up to 13 km through Sliema, Pieta, Gazira, and St. Julian’s

Scenic waterfront running between the capital of Valetta and Paceville on a combination of sidewalk and dedicated... more...