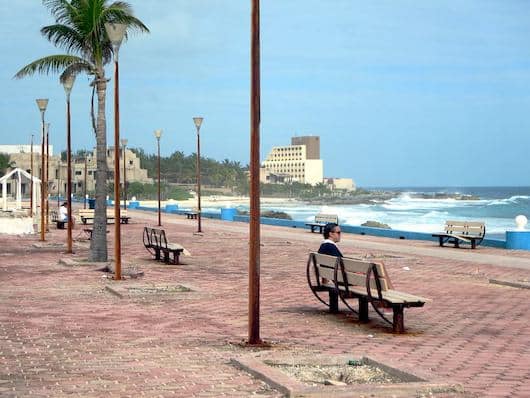 Isla Mujeres is a small island where the Gulf of Mexico and the Caribbean Sea meet, about 13 km from Cancun and easily reachable by ferry. It’s popular for its beaches, snorkeling, and laid back atmosphere. The island is 7 km long and 650m wide. Isla Mujeres is also terrific for running — much better than Cancun!  Also, there aren’t a lot of cars, which is great for pedestrians, although you have to keep your eye out for scooters and golf carts. The “town” is at the northern end of the island, near the ferry dock. The east (Caribbean) side is better for running, as there’s a longer oceanfront path (Malecon) and better views. The west coast road is more interior and less scenic. Our recommendations:

East Coast (Caribbean side).  One can run pretty much the entire 7.5 km length of the island’s east coast on a combination dedicated promenade (Malecón) or along the main road, which has a decent sidewalk (though opposite the sea).  There are water views most of the way. Some of the nicest sections are between the Capilla de Guadalupe south to the Margarittaville Hotel; the southern end of the island at Punta Sur (lighthouse, the remains of a Mayan temple); and the Malecón at the northern end. Pro tip: Go early to catch the sunrise!

West Coast. The road along the west coast is more interior, with more homes & hotels blocking the view of the water. At the northern end, there’s a Malecón that goes for ~1.5 km north from the ferry terminal. Great sunsets from Playa Norte!

Airport. Here’s a unique run!  The runway of the former Isla Mujeres Airport is now a popular place for jogging! Access it from just south of town. Do some speed work on the 1.3 km (0.8 miles) runway, and combine with the waterfront paths on the east or west sides of the island.

Beaches. The beaches on Isla Mujeres aren’t great for running. On the east coast, the beaches are rough and rocky, while the popular beaches on the west side aren’t that long and tend to be narrow. The most ‘runnable’ beach is Playa Norte at the island’s north end.

In central Cancun, the best options for running are: the bike path that extends towardd the hotel... more...

This resort island 12 miles east off the east coast of the Yucatán Peninsula is FABULOUS for... more...