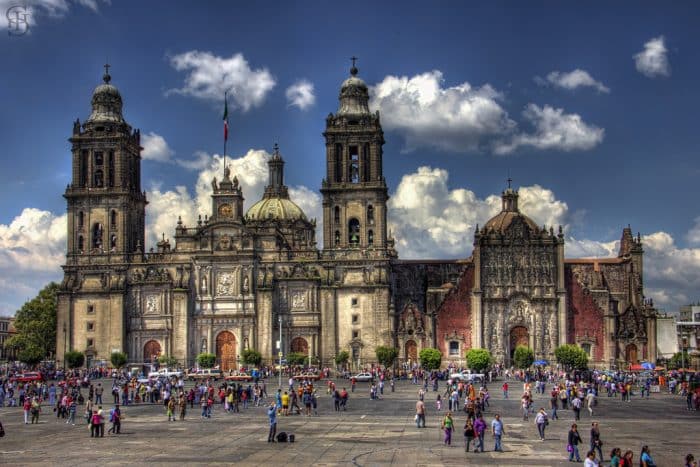 **Note: It’s best to time this run on a Sunday morning when Reforma Avenue is closed to traffic until mid-day.

What better way to experience the landmarks of Mexico City than on a run? This route takes you past impressive and unique architecture and exposes some amazing culture and history. NOTE: This is an easy-to follow-route —  most of it is on Av. Reforma. The description below is more details on the sites!!

Exit the Square on Av Francisco I. Madero then turn RIGHT, onto Condesa. [On your right, you will see an ornate structure called the Casa de Azulejos, or The House of Tiles, with a unique facade of blue and white tiles. Follow Condesa until you get to Calle de Tacuba, with the Plaza Manuel Tolsa and an equestrian sculpture of Charles IV of Spain, known as El Caballito. Enjoy the beautiful architecture of buildings in this square like Mining Palace, National Museum of Art, and the Post Office (Palacio Postal).]

Take a LEFT on Calle de Tacuba (going away from the square) to Alameda Central Park. Enjoy the shade of the poplar trees, Alamo in Spanish, that the park was named after. At the end of the park, you will reach Av. Paseo de la Reforma, an ancient road modeled after the Champs-Elysees in Paris. There are wide sidewalks on this main road lined with stores, offices, and important sites. Pass El Ángel de la Independencia, (a monument to Christopher Columbus), and the Huntress Diana Fountain (Fuente de la Diana Cazadora). Turn around here and retrace your steps.

Exit Reforma Avenue on Calle Morelos and continue until you reach Lázaro Cárdenas near the Metro San Juan de Letrán Station. At this corner is the Mercado de Artesanias San Juan, an artisans market. LEFT, past the Torre Latinoamericana — a member of the World federation of Great Towers. Continue on this road until you see the main opera house of Mexico City, the Palacio De Bellas Artes. From here, continue down Avenue Cinco de Mayo to return to the starting point.

Add-Ons: Combine with Bosque de Chapultepec  — the largest city park in the western hemisphere. It’s at the southwest end of Av. Reforma