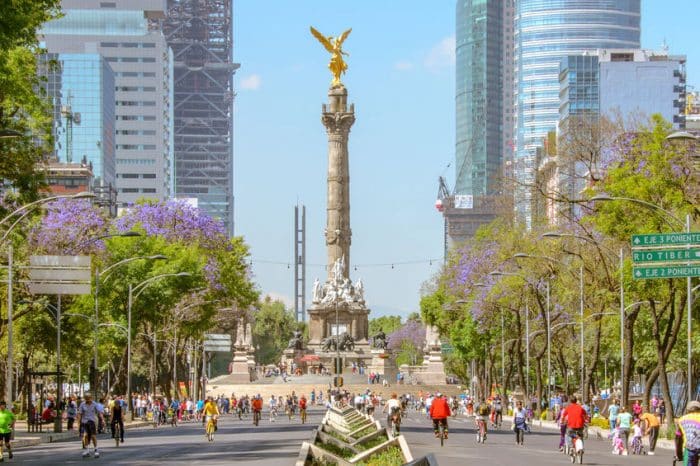 Mexico City is the capital of Mexico and the largest city in North America. This dense, sprawling high-altitude city is a busy financial and cultural center.  Within Colonia Centro, is Centro Histórico, location of historic landmarks, and numerous museums. Owing to the density and traffic, running in Mexico City can be a challenge. The best places to run tend to be in the city’s large parks.

Our 10k ‘runseeing’ tour of Mexico City’s key sights is a good way to orient yourself — do it on Sundays when Reforma Ave. is closed to traffic! Chapultepec Forest, just outside Colonio Centro, is the signature running spot and the largest urban park in the Western Hemisphere. In between Colonia Centro and Chapultepec Forest lies Zona Rosa, which is popular for visitors and has some nice running areas. South of Zona Rosa, there’s nice running in the Roma and Condesa neighborhoods. There’s good running around the large UNAM national university. Other running highlights in Mexico city are the Coyoacan and San Angel neighborhoods. Not far from the city, El Ocotal, Cuemanc, Bosque de Tlalpan, and Forest of Aragon are worthy running destinations. In the southern part of the city, the Ciclopista Ferrocarril de Cuernavaca is a lengthy bikeway that offers good off-road running.

There are two obstacles when running in Mexico City: altitude and pollution. At 7,350 feet, it’s important to allow yourself to become acclimated to the elevation before pushing yourself. Pollution is also a reality in Mexico City. Try planning your runs in the morning or the evening when the air quality is better. As for getting around, the metro system consists of 12 lines and 195 stations. The city’s bus rapid transit line is the Metrobús, with metro-style stations in the middle of the street, spaced at three- to four-block intervals. Peseros are gray-and-green minibuses operated by private firms.

Some of our favorite runs in Mexico City, Mexico 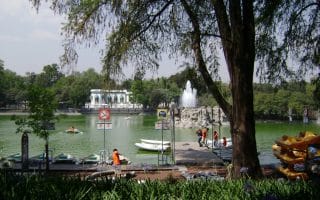 Parks | Iconic Parks
Centrally located park located in the trendy Condesa neighborhood providing an urban oasis for runners. A loop of the trails and paths is about 1 km, so you'll have to do some laps.
Explore 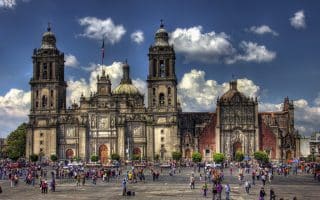 Historic / Tourist | Iconic | Runseeing
This is a 10k mile tour of some of Mexico City's most important and historic sites, starting from the Zócalo metro station. NOTE that on Sundays, Reforma Avenue is closed to traffic until mid-day — a special bonus for runners!
Explore

Gorgeous Residential
A 3 mile tour of Coyoacán, a quaint neighborhood is known for its cobblestones and bohemian flavor. Includes some parks, pretty residential streets, and sites including Templo de San Juan Bautista and the Frida Kahlo Museum.
Explore 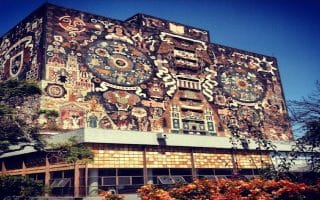 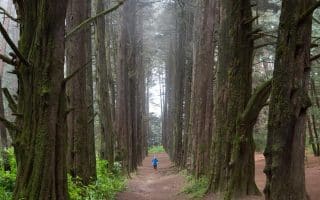 Trail Running
A forest in the Cuajimalpa delegation in Mexico City. The best time to visit is on the weekends, when it is bustling with runners and walkers. There are native tree species such as fir, ash and pine. A running circuit of about 2.15 miles is very popular.
Explore 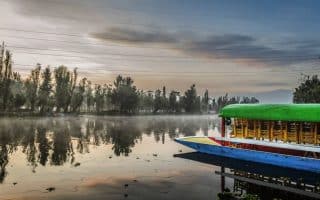 Along the Water | Olympic Sites
Canal Cuemanco, in the eastern part of the city, was the venue for rowing competitions in the 1968 olympic games. The paved 5K path around the canal makes a great place to run away from Colonia Centro. Great views of volcanoes and mountains.
Explore 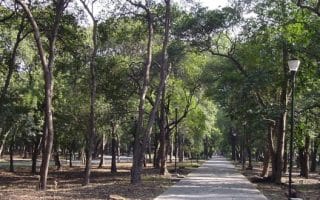 Multi-Use Trails | Parks | Near Airport
The Bosque de Aragón is a park located in the Gustavo A. Madero, near the International Airport of Mexico City. There is a 2.5 km paved path surrounding a fountain and a second 5 km dirt path around the perimeter of the park.
Explore 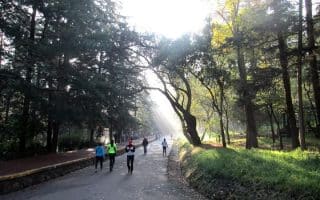 Multi-Use Trails
The Forest of Tlalpan is one of the best known locations among runners, athletes, and nature lovers who live south of Mexico City. Five different running tracks and lots of natural beauty make this forest an ideal place for exercise. Accessible by public transport.
Explore 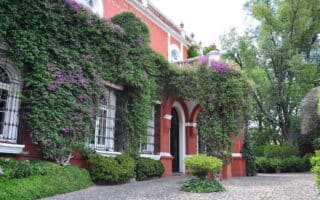 Gorgeous Residential | Fantastic Neighborhoods
Many of the more bucolic neighborhoods and residential areas of Mexico City are in gated communities, but this is a selection of some attractive, accessible neighborhoods for running.
Explore 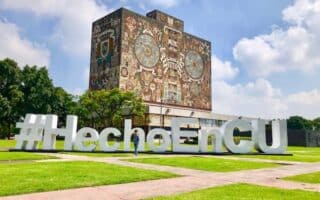 Historic / Tourist | Olympic Sites | Universities
UNAM is the largest university in Latin America, and boasts one of the largest campuses in the world. This public campus, and the surrounding “University City,” make for a great run. We've mapped a 12 km loop, but good options to create your own.
Explore 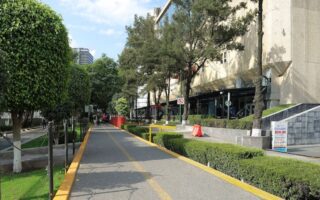 Multi-Use Trails
This lengthy, paved multi-use path offers offers many km of off-road running for those in the southern neighborhoods of Mexico City.
Explore 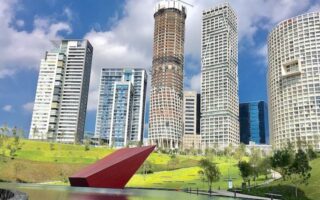 Multi-Use Trails | Parks
Looking for a short run or a place to do laps near your neighborhood? Try one of these Mexico City parks!
Explore 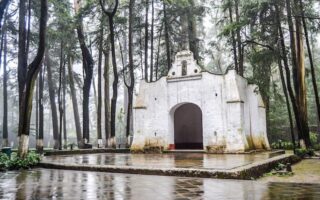 Trail Running
Mexico City is a relatively huge urban sprawl, but that doesn’t make it impossible to get out of the city and enjoy some trail running.
Explore

Historic / Tourist | Iconic | Runseeing
This is a 10k mile tour of some of Mexico City's most important and historic sites, starting from the Zócalo metro station. NOTE that on Sundays, Reforma Avenue is closed to traffic until mid-day — a special bonus for runners!
Explore

Mexico City enjoys mild, pleasant weather (great for running) year round. It’s climate is classified as subtropical highland due to its tropical location and high elevation. The average high is between 70 an 85 (21 to 28 12 to °C) throughout the year. Nights can be cool, as low as 5C in thw winter months. October through May is the city’s dry season, and from June through September is considered the “rainy season”. During the summer months it rains on average once a day, though the rain rarely lasts longer than a few hours. Due to the city’s location near the equator, there is not great variation in daylight length.

There are numerous options for lodging in Mexico City. Some of the most reasonable places are in the Centro Histórico, while more luxurious accommodations, are concentrated in Polanco and the Zona Rosa. Staying in Centro Histórico and Zona Rosa provides access to the Historic Downtown route from your front door. Similarly, staying in Polanco (bordering Chapultepec Forest), has easy access to running routes in the forest. South of Zona Rose lie the Roma and Condesa neighborhoods. These bohemian neighborhoods feature the city’s hippest cafes and bars, from cutting-edge restaurants to offbeat shops, art galleries, and nightclubs. Condesa is close to the Chapultepec Forest routes, whereas routes from Roma are accessible through Metro transportation. 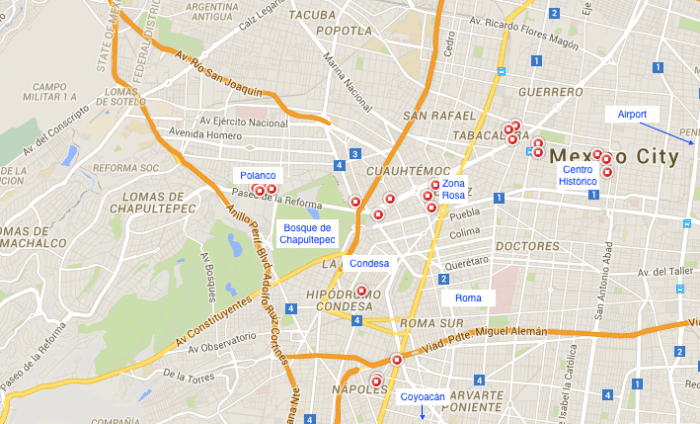 There aren’t as many specialty running shops in Mexico City as in some other cities, but here are a few.

Trailsport Carries a wide variety of specialty items for running, triathlon and cycling.

Some of the major running events in Mexico City: