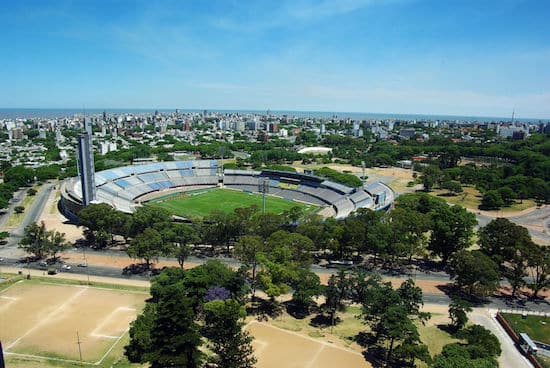 The Estadio Centenario is a 60,000 seat soccer (futbol) stadium located within a larger park and athletics complex. This is a great spot to head for a run! There are numerous roads, paths, and lots of green around this area, which altogether can add up to several km. There’s also a state-of-the-art running track. Other facilities include a velodrome and athletic fields. It might even be possible to run through a gate into the stadium and do some stairs.

A good place to start is at the granite obelisk built in 1930 to celebrate the 100th anniversary of the constitution of Uruguay. Run along parklike paths for 0.5 km to the fountain, and then into the park/stadium complex. Other sights along this perimeter run are Monumento Al Maestro, Monumento a la Carreta, a Soccer (Futbol) Museum, numerous soccer fields,  Batlle Park & Vees Park.