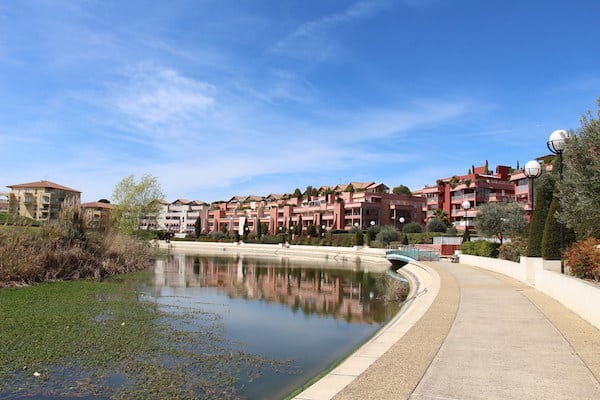 This run anchored by the southern part of the Lez River in Lattes is a nice loop, incorporating a marina,  riverfront paths, marshlands, and bucolic farming fields. It’s nearly all off-road or on lightly trafficked secondary roads.

Start at Port Ariane in Lattes, located 6 km south of Montpellier. You’ll do a ~1 km loop of the port’s pretty waterfront roads, then joining the dirt path along the eastern side of the Lez River. Head south for 3 km along the path. Just past the Ecuries des Salins stables, turn LEFT onto a small dirt road, toward Méjean Pond (nice views!), then head north along the D58 along La Roubine canal. The D58 is a small gravel road, with open views to farm fields. Head north for 3 km, returning to Port Ariane.

Add-Ons: Can continue south to the mouth of the Lez River to Palavas-les-Flots, a town on the Mediterranean which. Numerous roads and paths along the canals and lakes in the area.

Running along the Lez River in Montpellier is a classic European river run. There are paths on... more...