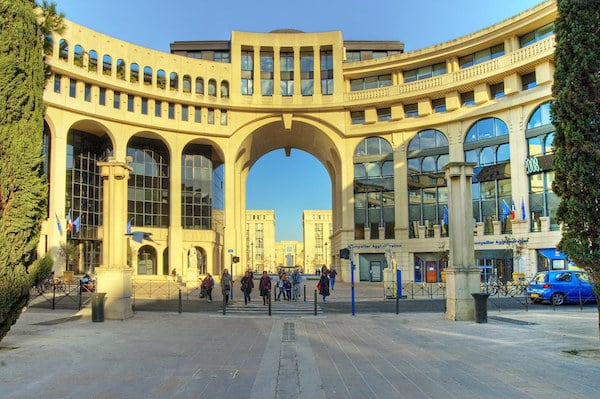 This is a 7 km ‘runseeing’ tour of the older, historic sections of Montpellier, highlighting the Place Europe, Antigone, Arch, Botanic Gardens, and the Charles de Gaulle Esplanade. It’s a pedestrian-friendly route. without many turns, and good opportunities to add on. A shorter option is just over 5 km, featuring mainy the Esplanade and Arc.

Start at Espl. de l’Europe, near the Antigone Pool. Run through a series of pedestrian squares in the Antigone area, along the Place du Millénaire — a sort of grand allée. Exit on the left side of the shopping center to take Rue Beaudin to the Fountain of the Three Graces, then Rue de la Loge to Rue Foch, which makes a grand approach to the Arc de Triomphe, including the imposing, 1700s era Saint-Clément Aqueduct. From the Arc, head northeast along Rue Richer to the Botanical Garden, and then an 0.5 km out and back jaunt along Boul. Henry IV. Next, take Rue de Refuge through the older, cobblestoned section of Montpellier, passing the Cathedral and two squares, to the Charles de Gaulle Esplanade. End the run along one of the allées through Antigone.

Add-Ons: A couple of loops around the Esplanade and Botanical Gardens; weave in and out of the maze-like streets of the older section of Montpellier. Paths along the Lez River headed south.

Running along the Lez River in Montpellier is a classic European river run. There are paths on... more...