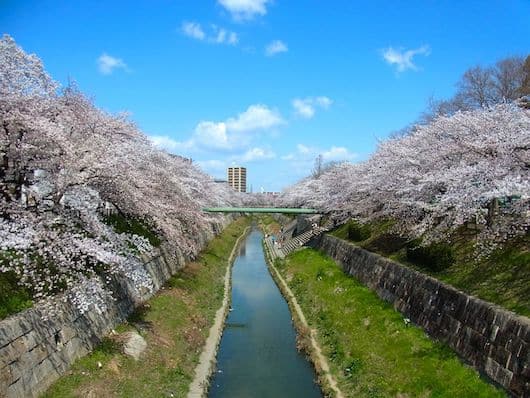 There are some pleasant paths, parks, and roads lining the Yamazaki River in the southeastern part of Nagoya, in the Mizuho District. The area is especially popular during cherry blossom season. Running in this area is anchored by the Mizuho athletic complex, which has a number of waterside paths, as well as fields and numerous recreational facilities. North of the complex, a quiet road known as the ‘Four Seasons Road of Yamazaki River’, runs above the river, and there are some gravel paths alongside the river itself, accessed by stairs that go down to the river.

We’ve mapped a 3.6 km one-way route from the southern end of the athletic complex, north along the area’s paths and then the ‘Four Seasons Road’, to Kawana Park. It’s a fairly quiet road that also has a narrow path in sections. There are restrooms and water at the athletic complex.

One of the best spots for a longer, off-road run in Nagoya. Gravel paths line the Shonai... more...