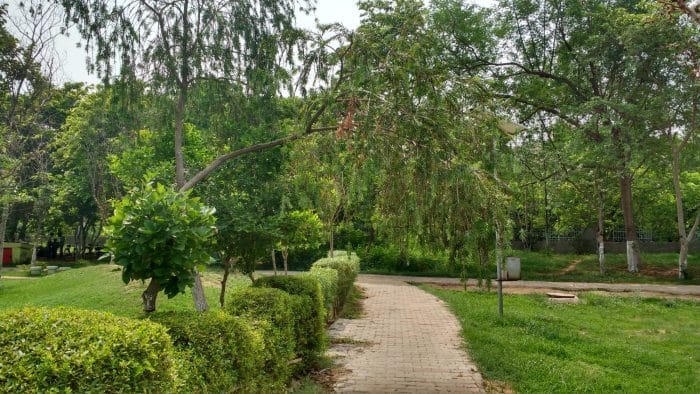 Gurugram, also known as Gurgaon, is a city just southwest of New Delhi in northern India, known as a financial and technology hub. Here are our recommendations on the best places to run in Gurugram:

Leisure Valley Park: This 25 km park in Gurgaon is a fun destination complete with an open air theater, a musical fountain, and lots of trendy bars and restaurants surrounding it. There aren’t many long paths in the park, but a designated .7 km cement pathway is a pleasant place to run some laps. The park is lush and well-maintained, and very popular among the running crowd mornings and evenings. Access is easy from the nearby IFFCO Chowk metro station (yellow line). ROUTE MAP.

Aravali Biodiversity Park: There is no better place for a hill run in nature than the Aravalli Biodiversity Park, located on the north side of Gurugram. This nature park is unique not only for its flora and fauna, but its miles of cement paved paths over rolling hills. There is a 3.5 km designated jogging track through the park, but there are plenty of other options to choose from. Whiz by open fields, wetlands, and scrubby forests on these winding paths. You can go solo or join the Gurgaon Road Runners, which host frequent group runs in the park. ROUTE MAP.

Tau Devilal Biodiversity Park: Those seeking a peaceful jogging track option in the area of Kanahi need look no further than the Tau Devilal Biodiversity Park. While this asphalt loop is only 1 km around, it’s one of the best-maintained running paths around, and the lush gardens are a nice escape from the busy city. Metro: Sector 54 Chowk. Note: Parkruns happen frequently here. ROUTE MAP.

Gurgaon-Faridabad Road. For those craving a long road run in Delhi, this is one of the better options. Not exactly scenic! ROUTE DETAILS