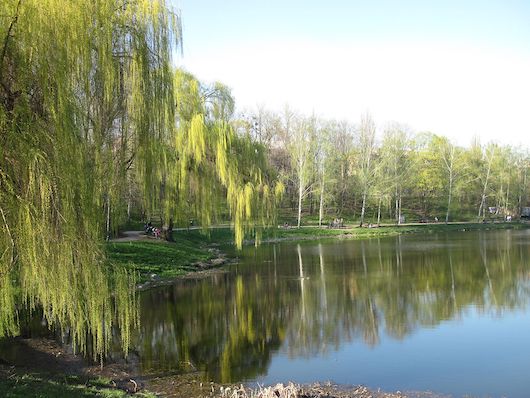 There’s a series of several parks in northwest Kyiv that offer some very pleasant running. Dubky Park, Nyvky Park, Syretsʹkyy Park and, Babyn Yar Park can be run standalone or combined for a longer run. The area has good metro access. We take a pause here to acknowledge the terrible history of Babi Yar, where some 100,000 Jews were slaughtered between 1941 and 1943.

We’ve mapped a 10k route combining Dubky Park, Nyvky Park and Syretsʹkyy Park. Start with 2 km through Park Dubky, which has wide mainly wooded paths. Exit the southern end and run for 1 km to Nyvky Park (Mahistralna St., left on Cherkaska St.). Nyvky Park is the largest of the these parks — a full loop on its mainly gravel paths, which includes two lakes, is 4 km. Exit the northeastern end next to the U.S. Embassy onto Parkovo-Syretska St. for 0.5 km into the smaller Syretsʹkyy Park, which has ~1 km of allée-like paths. Exit the northern end onto Ryzka St. to complete the loop.