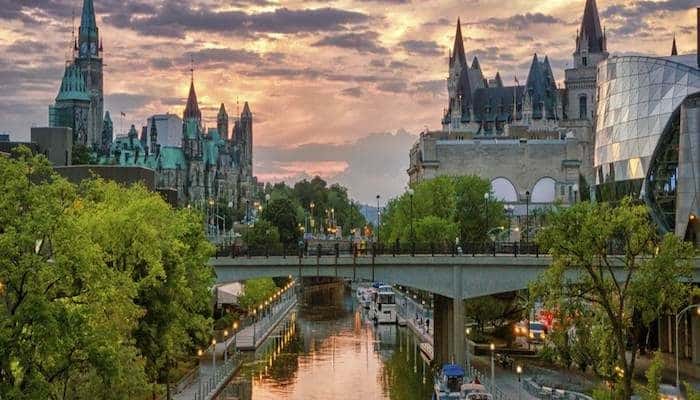 This is a 5-mile tour of Ottawa’s most important sites. The route starts at Rideau Hall, home of the Governor General, and goes right by 24 Sussex, home of the Prime Minister. Run by Rideau Falls, and a nice park nearby. Just after the 1-mile mark, pass the Royal Canadian Mint, National Gallery, and Notre Dame Cathedral, and the United States Embassy in front of Major’s Hill Park, which is Ottawa’s first park. Soon after, just shy of the 2-mile mark, Centennial Flame and Parliament buildings will be on the right, and the National War Memorial on the left. The route will then pass by several important government buildings: Confederation Building, home of government offices, Supreme Court of Canada, and the Library and Archives Canada. Just after the Archives, the run returns on the Trans Canada Trail, behind the Parliament buildings and along the Ottawa River. Note that at the Rideau locks, one has to climb a set of stairs to get back to Wellington St.

Add-On: A nice add-on is to head over the Alexandria Bridge, which has a good sidewalk, to the fabulous Museum of Canadian History, and along the paths of Jacques Cartier Park. This adds 1.8 miles one-way.

Shorter Loop: We have also put together a shorter ‘ceremonial’ run of 3.3 miles, which starts at Parliament Hill and continues west to Portage Bridge, across the rapids to the Museum of Canadian History on the Quebec side, then back over the Alexandra Bridge to the National Art Gallery and U.S. Embassy.

One additional benefit of this particular run is that most of the streets are cleared in winter.