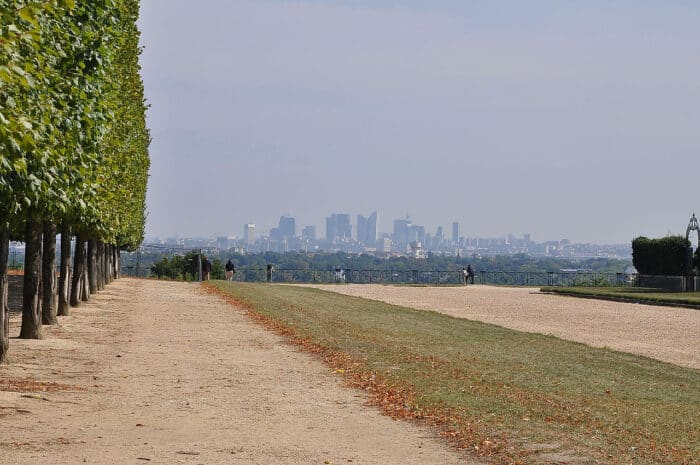 Saint-Germain-en-Laye is a western suburb of France, and it’s a worth-it destination for a run, between its 3,550 hectare Forest, the grand grounds of the The Parc du Сhâteau, and nearby paths along the Seine.

Saint-Germain-en-Laye Forest: Create your own or loops of 13 & 7.5 km, rolling hills
Another of Paris’ great forests is Saint-Germain-en-Laye, a spacious 35 square kilometer woods located 20 km west of Paris. Most paths through the park are wide, firmly packed dirt, though there are some sections of loose sand. Runners should have no trouble plotting a route of their desired length. We’ve mapped two routes: a 13 km loop through the north end of the forest, and a southern loop of 7.4 km. ROUTE MAP NORTH SECTION; ROUTE MAP SOUTH SECTION

Parc du Сhâteau: The Parc du Сhâteau Saint-Germain-en-Laye is a beautiful mansion and gardens situated atop a hillside overlooking the Seine. It’s at the southern end of the Forest, just south of the A14. Numerous well-groomed paths and allees throughout the grounds are fab for running, plus it’s easy to connect to the Seine paths and the Saint-Germain-en-Laye Forest. A loop around the perimeter of the park is just under 4 km. ROUTE MAP.

Two great running routes in this wealthy suburb to the west of Paris are the Promenade Jacques... more...