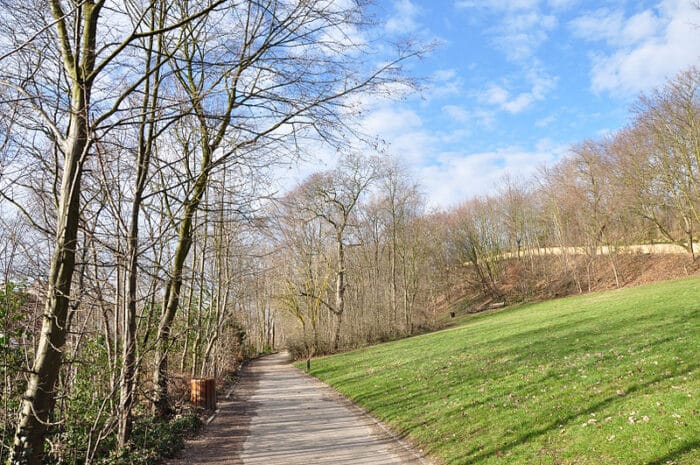 Rueil-Malmaison is one of the wealthiest suburbs of Paris. It’s located just west of the Boul. Périphérique and the Bois de Boulogne. There are lovely residential areas, major parks, and paths along the Seine. Two recommended routes:

Promenade Jacques Baumel: 2.5 km (1.5 mile) loop. Elevation Gain: 19m
A star shaped park around an old Fortress, the Promenade Jacques Baumel has a contentious history as a place of hermitage, pilgrimage, and bloodshed. Today, it’s a memorial to France’s fighting spirit. A lovely, 2.5 km paved loop trail skirts the perimeter of the fortress, featuring great views of Paris. Can also connect paths along the nearby Seine and the Bois de Boulogne. ROUTE MAP.

Malmaison Route: 5.1 km (3.3 miles) one-way; Elevation gain: 131m
A great, and hilly run incorporating two parks, two Châteaus, and forest paths. Château de Malmaison is a bit smaller and less dramatic than other Paris chateaus, but these grounds are still a fantastic place for an exploratory run. Start at the Parc de Boise-Preau, run by the Château de Malmaison and the Château de la Petite Malmaison, then follow the path along Rue du Commandant Jacquot south into Malmaison Forest. We’ve mapped a 5 km (one-way) route that runners can use as an out and back or the start of a loop. For a longer run, there are many km of paths in the forest, and in several adjacent parks and preserves.  ROUTE MAP.

This is the loveliest, shadiest place for running in the heart of Paris. You’ll find hundreds of... more...

Saint-Germain-en-Laye is a western suburb of France, and a worth-it destination for a run, between its 3,... more...