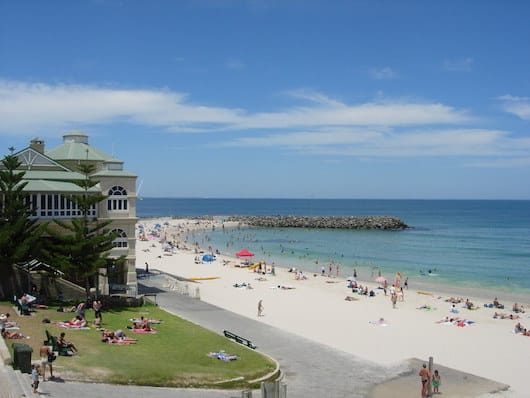 There’s wonderful coastal running at Cottesloe Beach, located 15 km west of Perth and accessible by train. There are many km of picturesque coastal paths next to pure white sand beaches. A preferred route is from Cottesloe Beach to the seven dinosaur cranes at Fremantle Harbour (Leoghton Beach), which is 8 km (5 miles) out and back. The beach is also runnable, although rocks separate the beaches so you will have to divert onto the footpath at times. Bonus: Outdoor gyms along route if you want to press some weights!

Loop Option: One can also take the bayside trails along the Swan River back to Cottesloe. Just north of Fremantle, take McCabe St. and run the paths and roads hugging the bay, through Minim Cove Park, passing the Mosman Park Golf Club, and Bay View Park. Then use one of the side streets through the pretty Peppermint Grove neighborhood to the Cottesloe train station.

Longer run on this section: Head north from Cottesloe Beach to the Shore House at Allen Park, which is 1.5 km one-way (3 km out and back).

Other Area Options: Coogee heading north to Fremantle is also a popular choice for those starting lower south, this route is approximately 3.1 mile (5 km) return.

Cottesloe Beach is also home to Parkrun, a free group 5k held every Saturday morning. You can see the course map and learn more here.

Share:
Essentials
Route Map: Out and Back Route Map: Loop Option for Return