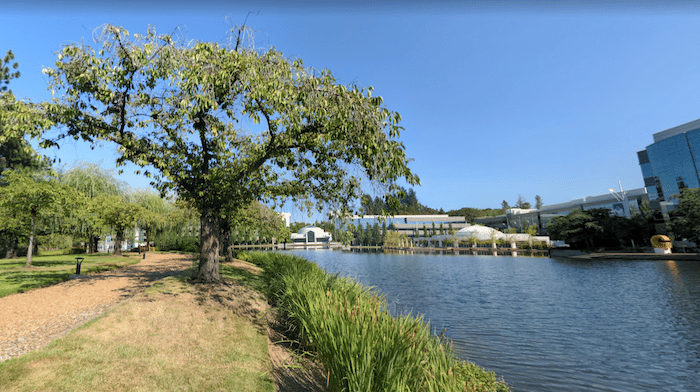 Runners should make a pilgrimage to the Nike headquarters located in Beaverton — a small city that borders on western Portland. There’s a terrific network of easy, flat multi-use paths in Beaverton, many of which can be combined for routes of various lengths. The best places to run in Beaverton are:

Nike Jogging Trail. This should be on any runner’s bucket list! Start at the symbolic Steve Prefontaine Hall [Prefontaine was an Oregon track legend who died tragically in an auto accident in 1975 — see Pre’s Trail in Eugene]. This trail with a wood chip surface in parts loops around an artificial lake and then around the perimeter of the Nike campus, passing numerous buildings named after famous athletes. A loop is ~3 miles, with an option to add the 1.4 mile Hollister Trail loop, just across SW Jenkins Rd. Be sure to take a lap around the Michael Johnson Track! For a longer run, connect to the Tualatin Hills Nature Park (below).  ROUTE MAP

Tualatin Hills Nature Park. Just across from Nike HQ and accessible from the Merlo Rd./SW 158th Ave light rail station, there are 3-4 miles of easy, wide gravel trails through the woods.  At the east end is the paved Westside Trail. Longer run: combine with Nike trails or Waterhouse Trail.

Waterhouse Trail. This is a paved, ~5 mile linear park trail in Beaverton. The southern end starts at the Merlo Rd./SW 158th light rail station (northern end of Tualatin Hills Nature Park). Run for 2 miles north through Waterhouse Powerline Park. The trail continues north of Highway 26 (use NW Bethany to connect & cross), through John Marty Park & Pirate Park, ending at NW Springville Rd. ROUTE MAP  Along the way, there are some other short trails that make for some nice add-ons. From south to north:

Rock Creek Trail. This is a wonderful, 8-mile linear park trail that heads west toward Hillsboro. The eastern end is at Pirate Park (connections to the Waterhouse Trail, above). Head west on this paved path through Pirate Park, Emerald Estates Park, Allenbach Acres Park, and Bethany Lake Park [At the west end of Bethany Lake, there’s an 0.7 mile extension to NW Rock Creek Blvd.). Here, there’s an 0.7 mile section on NW Malhuer, where the trail picks up again at NW Rock Creek Blvd., crossing Highway 26. Continue south for another 2.8 miles through several connected parks, to the end of the trail at the west end of Orenco Woods Nature Park.  ROUTE MAP

All Portland, OR Routes