No Thanks
Quito, Ecuador 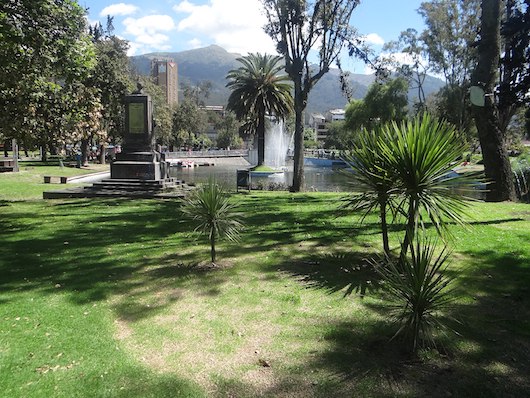 This is a pleasant run and an opportunity for some green that can be a standalone run or an add-on to our Quito ‘runseeing’ tour. The 4.5 km loop traverses three parks: pleasant paths through Alameda Park, the tree-filled El Ejido Park, and the more modern Parque del Arbolito and Cultural Center. Note: some of the major road crossings are a bit hairy.

We start at the Basilica del Voto Nacional, off Venezuela, in order to combine with our Quito historical route. Take Caros Ibarra east, to the Simon Bolivar statue and enter Alameda Park. Run along the park’s paths, passing through Plaza Frente al Observatorio and a small lake, to the opposite end, at El Churo (fort and hill if you so desire!). Then run along fairly busy Luis Felipe Borja (lots of restaurants) into El Ejido Park, which has 0.5 km of nice, tree-lined paths. At the end of the park, turn RIGHT on Avenida Patria, to then do a loop around the Parque del Arbolito, which has paths passing the Museo Etnográfico, Ecuadorian Culture Center, and modern sculptures. For the return, retrace your steps along Luis Felipe Borja and through Alameda Park.

This large park in the heart of Quito features an 8 km (5 mile) stone and gravel... more...