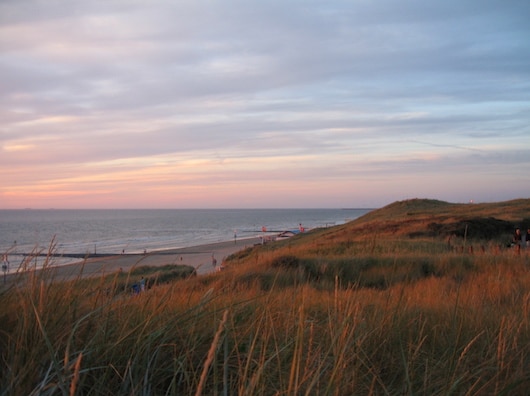 There are many km of wonderful beach, boardwalk, and coastal park running in the the two areas of Kijkduin and Scheveningen in The Hague. This is some of the most extensive beach running in an urban area in Europe. The beach itself is wide and fairly runnable, with firm, flat sand near the water. There are also some great parks and seaside paths/boardwalks. Here are some of our preferred running, starting from Kijkduin and heading north.

Beach Running (Kijkduin). It’s possible to run for nearly 16 km along the beach from the ‘Hook of Holland’ area (at the mouth of the New Waterway shipping canal into the North Sea), heading north to Westduinpark. This is pure beach running, although there are some sandy beach paths that run along and near the beach, some through dunes, in sections.

Westduinpark (Kijkduin). Fantastic nature preserve in Kijkduin, with numerous paths, some paved and some gravel or sand. Those closest to the beach are through dunes, while others are more wooded. It’s ~4.5 km from end-to-end. Combine with beach running at the Kijkduin beach resort, and head north toward to Hook of Holland for as long as you like!  For a longer paved/path run, do Westduinpark, and then the Strandweg, via a 2.5 km connection (see map) to Scheveningen. Boardwalk (Scheveningen). An extensive beach boardwalk, part of which is called Scheveningen Boulevard (Strandweg), is a wide, paved expanse that runs next to the water, and has different height levels that separate pedestrians, cyclists and motorists. There are numerous attractions along the way. It runs from the pier, north for 3 km to the the Strandhotel (Carlton Beachclub).

Oostduinpark (Scheveningen). A nice continuation from the northern end of the Strandweg (Carlton Beachclub). Run for up to 3 km through the gravel paths through dunes of this park, this “coastal battery” that the German High Command decided to construct as the Atlantic Wall along the European West Coast, 1942-1945.

Beach Running (Scheveningen). Another extensive section of beach, running from the Simonis aan de Haven seafood restaurant, north to pier and then the Strandhotel (Carlton Beachclub), for 3 km. A paved boardwalk, Strandweg, parallels the beach here. From the Carlton Beachclub, continue along the beach for as many km as you like, or take a great run through the paths of Oostduinpark (see above). There’s also a connector to Westduinpark to the south (see map).