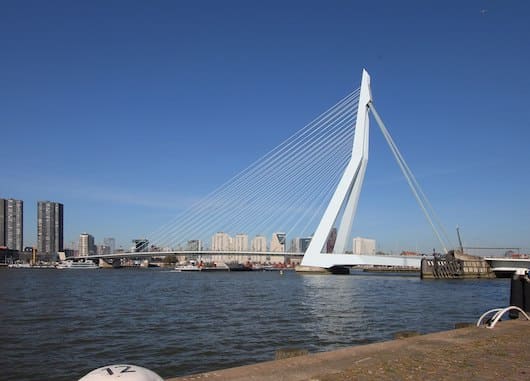 Paths along the Nieuwe Maas (river) are the signature running option in Rotterdam. It’s unlike some other classic river runs, in that it’s not a straight shot path with various bridge crossings. The geography is a bit complex, featuring numerous inlets and small canals. There are options for routes of varying lengths. The City of Rotterdam has mapped out routes of 3.5/5/10/21 km, with markers and some water stations – link here. We’ve re-created those in GPX format for app/device purposes. Below are the main descriptions of each. Within those are options to vary, add, and mix & match with parks and other waterside paths/inlets. The common starting point is the southern end of the iconic Erasmusbrug Bridge:

5 km Route. Run along the river heading east, paralleling the S100. There’s pedestrian path next to the bike path, or the Boompjeskade right along the water. After ~1 km, cross the Willemsbrug Bridge, and do a loop around the Noodereiland, which has a cobbleston-ey path next to the water. Then take the Stieltjesstraat to the Erasmusbrug Bridge, making this scenic crossing back to the start. To shorten, eliminate Noodereiland section.

10 km Route. Follows the same start but adds a longer section along the river, passing the Willemsbrug Bridge, and skirting the Botanical Garden/Oude Plantage. Take the path that skirts Erasmus University and a loop around the ice skating rink, running along the bike path of the tree-lined Toepad. Then retrace to the start paralleling S107/S100 waterside paths. Add-On/Variety: Nice waterside running in De Esch with paths along Buitenbassinweg and Nesserdijk/Schaardijk.

21 km Route. This allows one to complete a full loop rather than the 10k there and back above.  Adds on a waterside loop in De Esch, and then a not that pleasant (but runnable) section along the S106 bike path, and a ~3 km pretty waterside section in the Katendrecht neighborhood, crossing back over Erasmusbrug Bridge.