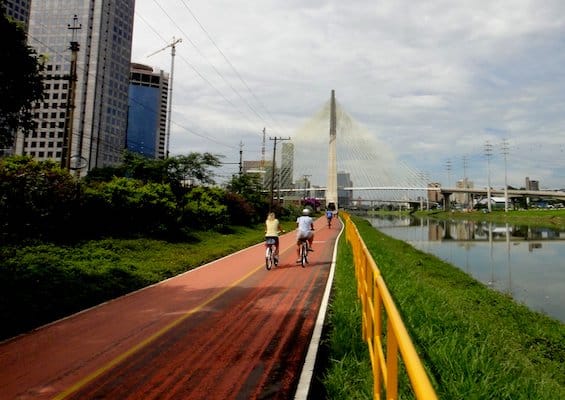 The cycle path along the Pinhheiros River (Ciclovia Rio Pinheiros) offers one of the best opportunities for a long, off-road run in São Paulo. The paved multi-use path runs for 22 km from the area around Parque Villa-Lobos and the University of São Paulo south to the Jurubatuba, near the Autódromo car racing track.  There are actually paths on both sides of the river for the first 16 km. South of the Santo Amaro metro station, the path along the Jurubatuba River is just on the east side. There are good water views most of the way.

The path and river are sandwiched between two busy highways. So it’s  not necessarily bucolic. Also, Most of the trail is quite exposed, so use caution in the heat! A few landmarks/add-on opportunities:

Notes:  There are only certain roads that can access the path, given its location next to/under the highway. They’re working on a bridge path connecting the river and Faria Lima. Also, Line 9 of the metro runs along much of the path, allowing for some fun one-way options!