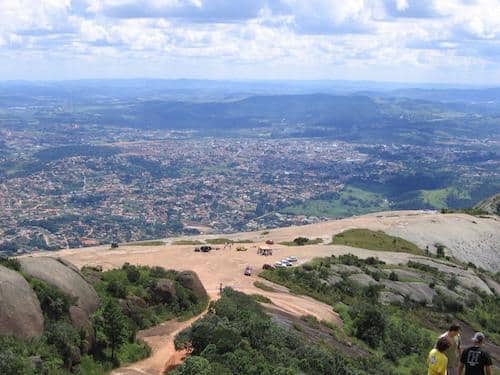 Cantareira State Park is a 6,000 state park about a 45  minute drive north of the city. The protects a remnant of of Atlantic Forest to the north of the city of São Paulo. There are roads and trails in this park — quite peaceful, with plentiful shade of the Atlantic Forest. The park is split into four quarters — Pedra Grande, Águas Claras, Engordador, and Cabuçu Running in Cantareira State Park is quite challenging — lots of hills. Some trails are more rugged than others. There are four visitor centers in the park, and four ‘nuclei’.

Among the highlights — and a real challenge for runners — is Pedra Grande (Big Rock), which rises to 1,010 metres (3,310 ft) and features a Visitor Center and lookout.  It is a 3.7 km (2.4 miles) one way walk/hike/run from the Águas Claras nucleus, in the eastern park of the park, off Av. Sen. José Ermírio de Moraes, involving a 935 foot elevation gain. It’s a steady downhill for the first half, and then a good climb for the second half of the 2+ mile one-way route, with grades of up to 9%.

Notes: Closed 5pm. Many of the roads in the park are narrow and do not have good shoulders.