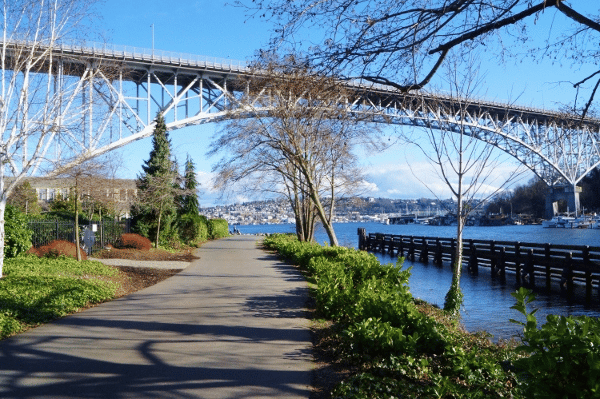 The Burke-Gilman Trail is a flat (think tempo runs) 27-mile long urban pedestrian and bicycling trail that connects many parts of Northern Seattle. It starts at Golden Gardens Park in northwest Seattle and continues to Redmond in northeast Seattle. This trail has numerous dirt paths that follow along the asphalt trail. The trail runs from Puget Sound past Lake Union and alongside Lake Washington. The segment from the city’s eccentric Fremont neighborhood to the University District takes you eastward along the shores of Lake Union, past Gas Works Park, and is a favorite among locals. The views are spectacular on this trail, as most of it hugs the shoreline and you have the opportunity to run through many neighborhoods. Brooks Running headquarters in Fremont is also along Lake Union and may just give you that extra inspiration on your run. We’ve mapped two sections closer to downtown. You can also start at the eastern terminus in Redmond.

Golden Garden Park to the Freemont Troll 4.8 miles. Start on Puget Sound at the Golden Gardens Park entrance, on the east side of Seaview Avenue NW