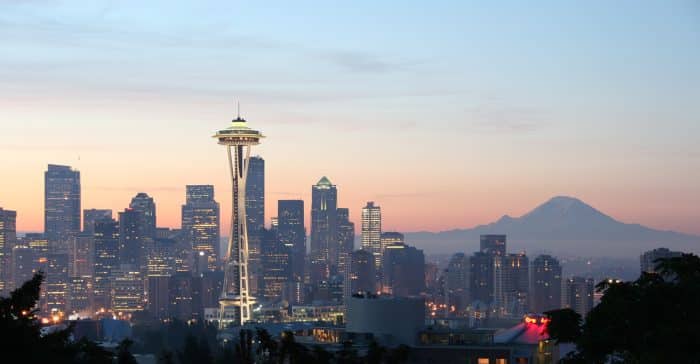 Seattle, also known as the Emerald City, is one of the most spectacular city settings in the United States. Situated on a narrow isthmus between Puget Sound and Lake Washington, there are miles of waterfront, and spectacular views of the mountains. There’s nothing like Rainier on a clear day! Running in Seattle offers a great variety, owing to the city’s unique geography, seven hills, and 5,500 acres of parkland. Two major bridges connect the city center with the major eastern suburbs.

The best place to run in downtown Seattle is along the waterfront paths of the Elliott Bay Trail. North of downtown, the Burke Gilman Trail has some pretty sections. We also love Discovery Park, Lake Union, Green Lake and Woodland Park. Another great run is the area around the Washington Park Arboretum/Marsh Island/University of Washington. South of the city, the running highlight is Lake Washington Blvd. to Seward park. Great residential neighborhoods for running include Capitol Hill and the Queen Anne neighborhood. In West Seattle, enjoy the Alki Beach coastal trail or the lovely trails in Lincoln Park. We’ve also developed guides to the best places to run in the eastern suburbs of Bellevue, Kirkland, and Redmond, location of major corporate offices and new residential neighborhoods. For some bucolic running away from things, head to Bainbridge Island. South of Seattle, a favorite run is the Soos Creek Trail from Renton to Lake Meridian in Kent. We’ve also mapped out several pleasant waterfront and park routes in the Tacoma area.

Seattle remains a car-centric city, with legendary traffic. A new light rail system has been a boon, connecting the University of Washington with downtown and out to the airport, and a new line connecting to eastern Seattle (Bellevue, etc.) opening in 2023-24. The King County Metro Transit offers a decent bus system. Note also Seattle’s famed weather — in winter, there can countless days of chilly, rainy, overcast. This gives way to spectacular summers, with consistent sun and mild temperatures.

Some of our favorite runs in Seattle, WA

Along the Water | Iconic | Multi-Use Trails | Rails-to-Trails | Seaside Promenades
The main waterfront trail route along Puget Sound running from Century Link Field in the south to Smith Cove in Magnolia to the north.There are various running options here.
Explore

Along the Water | Iconic | Multi-Use Trails | Lake Loops | Olmsted
One of the most popular destinations for running in the Seattle area. The outer loop is a perfect 5k! Great views of the lake, and on a clear day, Mt. Rainier.
Explore 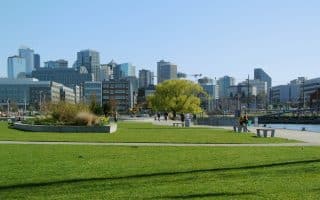 Along the Water | Lake Loops
The city of Seattle is divided by this heart shaped lake and has stunning views of the skyline, the Olympic Mountains & Mt. Rainer. 2–3 miles from downtown, and close to the Capitol Hill area.
Explore

Along the Water | Gorgeous Residential | Iconic | Multi-Use Trails | Rails-to-Trails
A flat 27-mile long urban pedestrian and bicycling trail that connects many parts of Northern Seattle.The views are spectacular, as most of it hugs the shoreline as it courses through many neighborhoods.
Explore 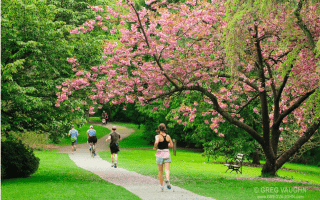 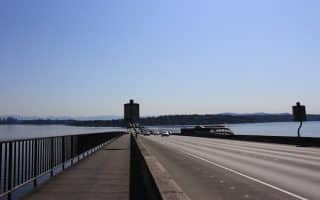 Great Views | Multi-Use Trails | Bridges
There are pedestrian paths/bike trails alongside both the I-90 and 520 bridges connecting Seattle to its eastern suburbs. Safe and scenic to run, with great views. Good add-ons, especially on the Seattle side.
Explore 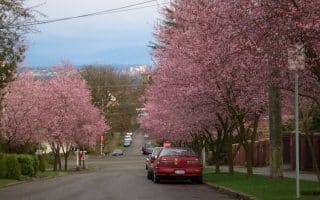 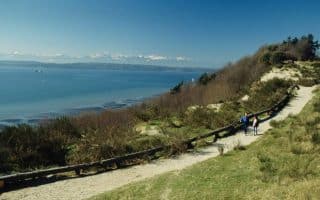 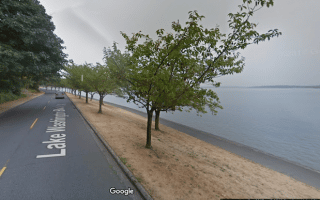 Along the Water | Multi-Use Trails | Parks | Olmsted
Fantastic waterfront running in eastern Seattle, just south of I-90. A 2.4 mile car-free loop around Seward Park, and then a path for 3.4 miles along Lake Washington Blvd., with water views the whole way.
Explore 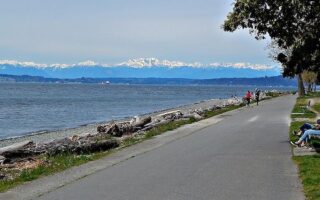 Along the Water | Great Views | Multi-Use Trails | Parks | Trail Running
Two great running options in West Seattle. A coastal path along Alki Beach is 3.4 miles to JackJack Block Park, with great views of Puget Sound and the city skyline. Lincoln Park has several miles of trails through woods, around fields, and along the coast.
Explore 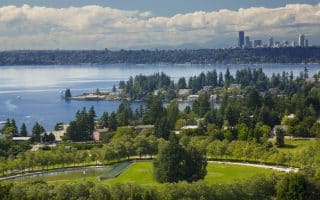 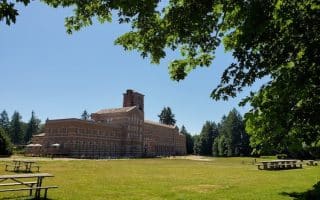 Hilly | Trail Running
Hilly, wooded trails in this relatively new park on the Kirkland-Kenmore border. It's the largest remaining undeveloped land on Lake Washington! Several miles of trails. A perimeter loop is a hilly 5k! Note some of the trails are narrow
Explore 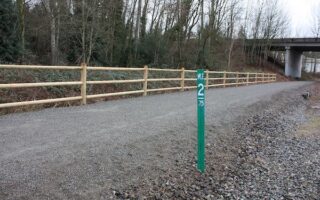 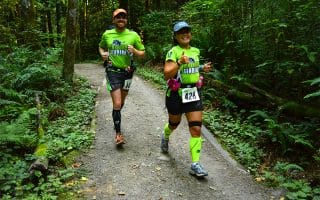 Along the Water | Parks | Rails-to-Trails
Our guide to running in Redmond, home to Microsoft and many other employers. Highlights are the Squamish River Trail, Marymoor Park, and the Redmond Watershed.
Explore 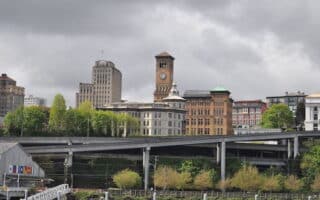 Along the Water | Great Views | Multi-Use Trails | Parks | Rails-to-Trails
A selection of some terrific running routes in Tacoma, a city of 200,000 located about 30 miles southwest of Seattle along the Puget Sound. Several waterfront routes and some nice parks. See the overview map for locations.
Explore 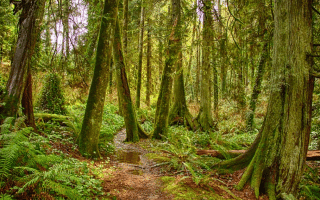 Hilly | Trail Running
Our guide to the many trail options on wonderful Bainbridge Island, just west of Seattle. Accessible from Seattle by ferry.
Explore 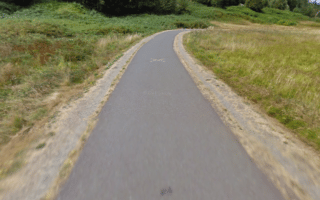 Multi-Use Trails
Several multi-use paths in the Renton area. The Soos Creek Trail runs for 7 miles between Renton and Lake Meridian in Kent, traveling through wetlands and farmland. The Green River Trail follows the Green River for 20 miles from Duwamish to Kent, and has some nice sections.
Explore

Along the Water | Iconic | Multi-Use Trails | Rails-to-Trails | Seaside Promenades
The main waterfront trail route along Puget Sound running from Century Link Field in the south to Smith Cove in Magnolia to the north.There are various running options here.
Explore

Along the Water | Iconic | Multi-Use Trails | Lake Loops | Olmsted
One of the most popular destinations for running in the Seattle area. The outer loop is a perfect 5k! Great views of the lake, and on a clear day, Mt. Rainier.
Explore

Along the Water | Gorgeous Residential | Iconic | Multi-Use Trails | Rails-to-Trails
A flat 27-mile long urban pedestrian and bicycling trail that connects many parts of Northern Seattle.The views are spectacular, as most of it hugs the shoreline as it courses through many neighborhoods.
Explore

The good news about Seattle weather: it’s temperate, rarely falling below freezing. The bad news: it can rain, or ‘mist’ for days on end, especially in winter. So pack wet weather running gear. Summers can be gorgeous, with some long stretches of dry weather. It never gets overly hot. There’s a good selection of hotels in downtown Seattle. The most accessible runs from downtown are along the waterfront Elliott Bay path. There are also hotels off Mercer St., 2–3 miles east, near Lake Union. There is also a cluster of hotels near the University of Washington, providing access to the Arboretum. In Bellevue, hotels are along the 405 or downtown, with access to the Lake t0 Lake trail. In Redmond, try to stay near the center and enjoy Squamish River trails and Marymoor Park. Downtown: Sound Sports
Right next to the Alexis Hotel, Sound Sports is a high quality running shop that makes sure to put you in the right shoes. Technically no official group runs, but people tend to gather at the store and go for a run together.

Since 1983, Road Runner Sports has grown from selling running shoes out of a garage to over 40 locations across America today. After 35 years, they are still family-run and proud of it! In addition to the Greenlake store on Woodlawn Ave, there are locations in Kent and Bellevue.

Magnolia: Seven Hills Running Shop
This is the only trail running specific store in Seattle. Group runs are Wednesday at 7:30pm, and Saturday at 8:30am. 6–8 mile run through Discovery Park and Magnolia neighborhood, including going through the Ballard Locks and Magnolia Bluff.

Rock ‘N Roll Marathon Quoted as one of the most beautiful marathon courses in the RNR series, 5.0, 13.1 or 26.2 mile options. Start and finish at the Seattle Center.

Seattle Seafair Torchlight Run (aka Michelob Ultra Seafair Pirate Run)
This 5K and 8K run is not only about making it to the finish line, but doing it in style. Racers wear pirate costumes and run through downtown Seattle on Tourchlight Parade night. After the race, runners enjoy food, entertainment and free beer in the Michelob ULTRA Beer Garden for those over 21.

St. Patrick’s Day Dash
This 5K began in 1985 as a dash between bars and as a training for an Irish Olympian. Today it’s Seattle’s largest single-distance run where the winners cross the finish before the last person starts. This 5K starts and finishes at the Seattle Center, winding through downtown Seattle along 4th Ave, and proceeds go to the Detlef Schrempf Foundation in support of Northwest children’s charities.

This 5K course starts and finishes near the Green Lake Community Center and moves in a clockwise direction utilizing the streets and inner path of the park run. Sponsored by Top Pot Doughnut, everyone gets a doughnut at the end of the race.

Cherry Blossom 5k. Seattle is famous for its cherry blossoms, and they have host a popular annual road race to celebrate it.