Tacoma is the largest satellite city of Seattle, Washington, located about 30 miles to the southwest along the Puget Sound. There are some nice waterfront routes and parks for running. Our suggestions for the best places to run in Tacoma: 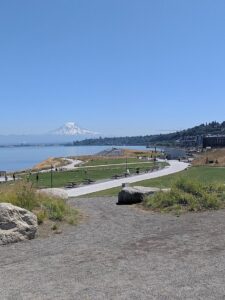 Ruston Way: Though technically Ruston is a separate city from Tacoma, it blends naturally into the peninsula of point Defiance on the north end of Commencement Bay. Ruston Way is the city’s low-key waterfront, and pretty much the whole stretch is runnable. From Dune Peninsula/Point Ruston in the north there is a smooth, mostly asphalt pathway leading south for 3.6 miles to Tacoma Chinese Reconciliation Park. Lovely water views! Add-Ons: north end at Point Defiance Park. ROUTE MAP.

Point Defiance Park: Point Defiance is the peninsula just north of Tacoma and Ruston. It’s considered one of the most scenic running spots in the area, with waterfront views, dense forests, and a selection of natural and asphalt paths. 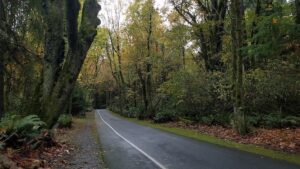 One of the most popular routes is the Five Mile Drive road circling the park. This paved one-way street has a wide shoulder that’s perfect for a run of — you guessed it — five miles. Another good running option is the Owen Beach Promenade. This concrete and gravel walkway runs from the Port Defiance ferry to the north end of the beach (about 1 mile one-way). Combine with the Ruston Way path for more mileage. Five Mile Drive ROUTE MAP. Owen Beach ROUTE MAP.

Thea Foss Waterway: The Thea Foss Waterway is the finger of harbor that lines eastern Tacoma, and the closest running option to downtown. Just off of Dock Street, runners will find sidewalks and a concrete walkway around the marina. The public esplanade starts at the Dock Street/East 15th Street intersection and continues south to 21st Street Park. It’s about 1.7 miles one way. ADD-ON: Nearby Wright Park. ROUTE MAP. 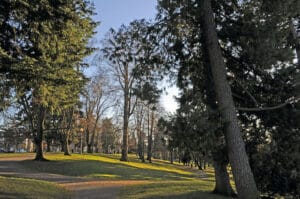 Wright Park: Another option close to the center of Tacoma is Wright Park, which lines South I Street. This arboretum and botanical garden has a huge network of paths, but a loop around the perimeter totals about 1 mile. ROUTE MAP.

Chambers Bay Walk: Chambers Bay is a large green space on the western end of the Tacoma peninsula. It’s home to a golf course that is encircled by a 5k paved loop with incredible water views. There are plenty of opportunities to extend the route by hopping on the East Slope Trail or the Chambers Creek Trail at the southern edge of the park (an additional 3 miles out and back). ROUTE MAP.

Wapato Lake: In the south end of Tacoma, Wapato Lake (at the center of Wapato Park) is a great choice for a short run. There is a 1 mile concrete path surrounding the lake, as well as some side paths leading towards South Alaska Street and South Wapato Lake Drive. ROUTE MAP.

Titlow Beach: Runners will find more fantastic waterfront running at Titlow Park in eastern Tacoma. The North Tilton Road is a paved ½ mile multi-use trail between 6th Ave and Hidden Beach Road. There is also a nice ½ mile gravel loop around the Titlow Lagoon. For more mileage, hop on the nearby Scott Pierson Trail to cross over the Tacoma Narrows Bridge. ROUTE MAP. 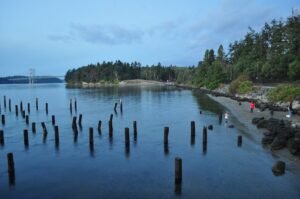 Gig Harbor/Cushman Trail: For runners with a bit of extra time on their hands, a trip across the water to Gig Harbor can be a fun destination run. This “Maritime City” has lots of cute homes, shops, and waterfront views. Harborview Drive is the main attraction at 2 miles one-way. Runners can add additional 3 miles on the nearby Cushman Trail. ROUTE MAP.

Foothills Trail: The Foothills Trail is a nice option in the eastern suburbs of Tacoma. It follows along the Puyallup River and White River for about 31 miles, with intermittent views of towering Mt. Rainier. ROUTE MAP.