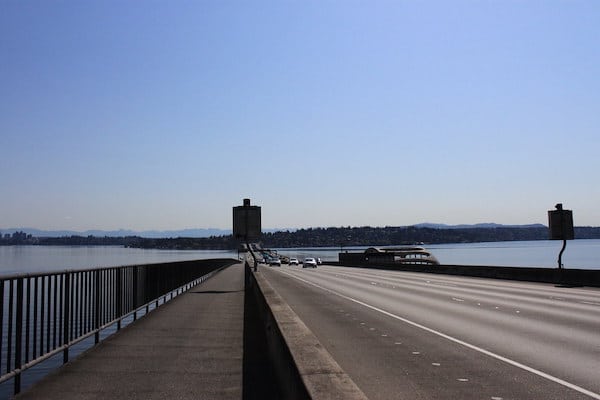 Two major bridges connect the city of Seattle to its eastern suburbs and the mainland — and it’s possible to run across both of them!  The I-90 bridge is closer to downtown, connecting to Bellevue via Mercer Island. The 520 Bridge is further north, and runs between the University of Washington/Arboretum area and Kirkland. There are dedicated multi-use trails on both these bridges that make for safe and scenic running. Pro Tip: Sunset headed west toward Seattle, sunrise headed east toward Bellevue/Kirkland.

I-90 Bridge. The path, called the I-90 Trail, runs on the northern side of the Hadley Memorial Bridge that carries traffic eastbound. The full route is ~5 miles. The path is separated from traffic, and there are great views of Lake Washington, and of the Seattle skyline if headed westbound.  Seattle access is at the East Portal Viewpoint. Bellevue access is off SE 34th St. You can also catch the I-90 trail off 118 Ave SE or the Mountains to Sound Greenway Trail in Factoria. For a shorter route, you can run to Mercer Island, which is at about the half-way point. Pro Tip: the East Lake Extension light rail will open in 2023, and will offer runners a great opportunity to do a one-way run! Here’s info and map of stations.

520 Bridge. This is the more scenic of the two bridge paths. A pedestrian path called the 520 Trail runs along the north side of what’s officially known as the Evergreen Point Floating Bridge. It’s ~3 miles across the bridge. There are great views!  Seattle access is E Park Dr E./E Hamlin St., just east of Montlake Bridge. On the east end, access is at the Evergreen Point Park & Ride in Medina, You can also pick up the 520 Trail in Kirkland off Lake Washington Blvd. NE, which adds 2 miles ans is not very scenic.