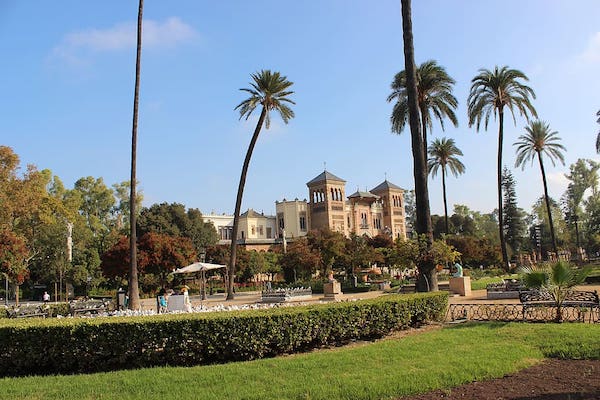 This scenic run has three distinct elements for variety: a loop through the iconic Guadalquivir Garden, the paths of Alamillo Park, and riverside paths. Start in central Seville at the Cartuja Bridge, and cross to the western side of the river. Enjoy a ~2 km loop around the paths of the historic Monastery of Santa Maria de las Cuevas, and then the lovely grounds of the modern Guadalquivir Garden, which was created for the Created for Expo ’92. Then, head north on the path along the river. There’s a brief, not that pleasant section of road heading into Amarillo Park.

The next section is around the trails of Alamillo Park, one of Spain’s largest urban parks, created in 2009 and since expanded. Lots of interesting Mediterranean vegetation. Create your own route heading north (it’s ~1.5 km north-south and 0.5 km east-west in the park). Bonus: running track at the park’s western side at Club Atletismo Alamillo. Head out the northern end of the park and cross over to the eastern side of the river, passing the modern Huevo de Colón monument, and head south on the wide, paved river path for 4 km, to the start.

For a longer off-road run, there are some decent paths along the Guadalquivir River. More developed on... more...