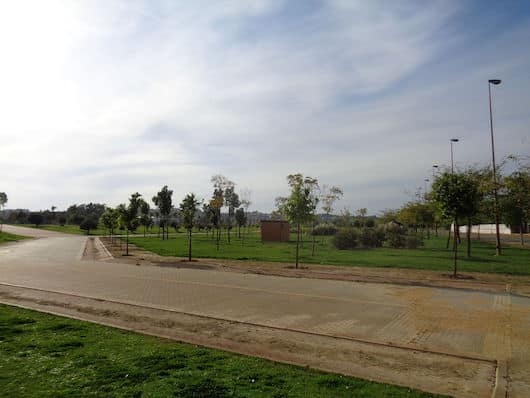 For a longer off-road run, there are some decent paths along the Guadalquivir River west of the city center. The most seamless stretch are the gravel paths starting on the western side of the river at the Puente de la Señorita (bridge), heading north for ~3.5 km to just past the SE-30. Note the paths are gravel, a bit dusty, and there are only occasional water views. One can continue even further north on a path that is less developed. There are also some quieter roads passing fields and farms once you’re north of the SE-30. It’s up to 7.4 k

We also like combining the river paths with the Vega de Triana Park, which has numerous paths along its nearly 2 km length. Unfortunately, there aren’t any particularly good crossings over the river. You can use Puente de la Señorita, but it takes a rather unpleasant 1 km loop around busy roads to access the bridge (see route map). There’s a path on the eastern side of the river as well, through Vega de Triana Park, and then continuing north.

Add-Ons: Vega de Triana Park, and our route in Alamillo Park and Jardines del Guadalquivir can be combined for a longer run.

This scenic run has three distinct elements for variety: a loop through the iconic Guadalquivir Garden, the... more...