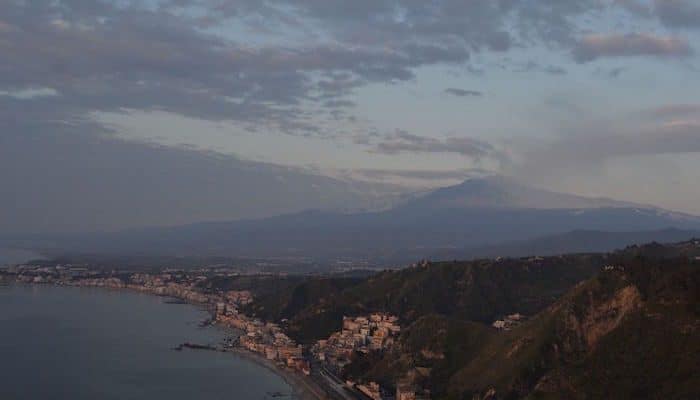 For those seeking a waterfront running option, the beachside community of Giardini Naxos delivers big. This popular resort area along the Ionian Sea has miles of beach, with a long “lungomare” (seafront walkway) bordering the coast. The street itself goes by many names as it makes its way north, but the walkway is more or less a continuous stretch of waterside sidewalk/oath. In the south, the walkway starts at Via Calcide Eubea, then becomes Via Schiso. In the downtown beachfront area, the street becomes Via Naxos, Lungomare Tysandros, Via Quattro Novembre, and Lungomare Regina Margherita before it ends near the Taormina-Giardini Train Station. As an out and back from the train station, it’s about 4.5 miles. The beach here is pretty narrow, but (tide-dependant) the sand is good for running too. The southern end features the very worthwhile Museum and Archaeological Area of ​​Naxos, containing ruins of the first Greek settlement established in Sicily.

Visit the villages of Forza d’Agrò and Savoca, where many of the Sicilian scenes from The Godfather... more...