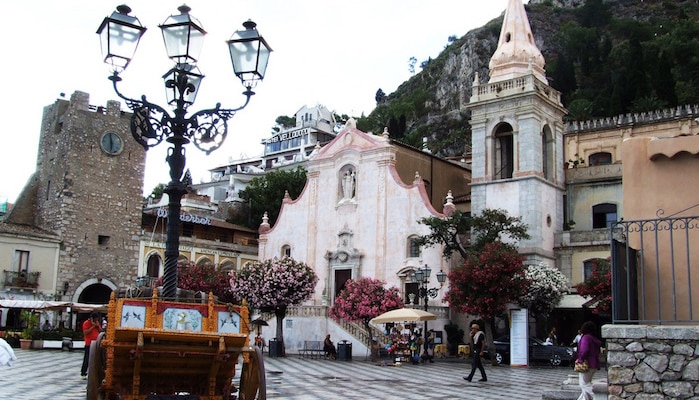 Taormina, a hilltop town on the north eastern coast of Sicily and about 50 km south of Messina, is a popular tourist destination for its history, architecture, and stunning views of the Ionian Sea and Mt. Etna. While this hilly location features the narrow streets typical of most Sicilian towns, Taormina’s historic center — Corso Umberto — is famously pedestrian-only. This strip of hand-painted pottery shops, gelato stands, and historic landmarks makes for a great run (just shoot for an early morning hour or a Sunday when the walkway won’t be too crowded).

Most hotels in the area are along Via Bagnoli Croci, so this is a good starting point. A thin strip of sidewalk winds along the hill here. Follow it to the Giardina della Villa Comunale park, and loop around the gardens here for some amazing views of Etna and the sea below. Exit the park and turn LEFT up Bagnoli Croci, which soon turns into Via Roma. Turn LEFT onto Via Roma, then turn RIGHT just past Ristorante Mirage to make your way northwest up Via le Mura, Via dei Naxi, and Via Fratelli Bandiera. This will deliver you to Corso Umberto. Turn LEFT first, and run the strip for about 1 km, passing Chiesa di San Giuseppe, Piazza IX Aprile and Piazza Duomo. Turn around when you reach the Porto Catania arch, then run back east along the shops until you reach Porta Messina. It’s possible to turn right and run down Via Teatro Greco here, but it only makes sense if you pay the 10 Euro to get in to the ancient theater (the views are worth it). Otherwise, run down narrow Via di Giovani to return to Bagnoli Croci.

The beachside community of Giardini Naxos, a popular resort destination, has a great lungomare spanning the coast... more...

Visit the villages of Forza d’Agrò and Savoca, where many of the Sicilian scenes from The Godfather... more...