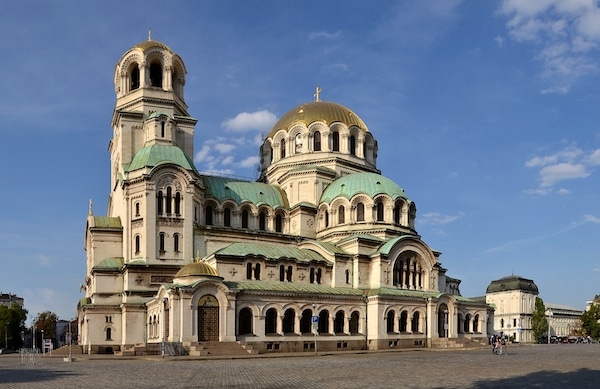 This 10 km ‘runseeing’ tour of Sofia hits the city’s commercial center, historic sights, and several parks. Use it as a guide to create your own route or add-on in the numerous parks!

A good place to start is at the National Palace of Culture, with a 1.5 km loop around the imposing alée paths. Exit north out of the Palace grounds, onto Vitosha Boulevard, an important main street that is also a pedestrian zone. Run for 1 km north, through this shopping area, and cross Boul. Alexandrov, passing the Saint Sofia Monument, the ancient west gate, and old Synagogue.  The next section is a loop around the impressive Banya Bashi mosque, the 4th century Church St. George Rotunda, St. Kyriaki Cathedral Church, Court House, and other important sights. Head east for linear park section through City Garden, the impressive park grounds of the National Gallery, the Neo-Byzantine Cathedral Saint Aleksandar Nevski, Sofia University, the Doctor’s Garden, and then slightly north into Park “Zaimov”. Exit the park and head back south, completing the loop by running west through Knyazheska Garden and then along Boul. Hristo Georgiev.