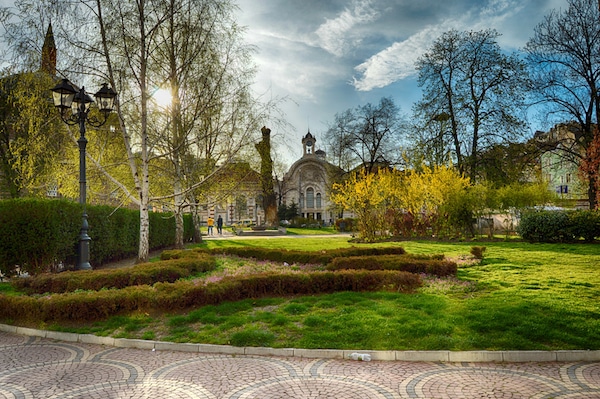 This highlight of running in Sofia are its series of large, mainly wooded parks located near the city center. The three parks south of the city — Borisova Gradina Park, Loven Park, and South Park, are adjacent and are large enough for a standalone run or can be combined in a ‘grand tour‘. North of the center, West Park and North Park are great for running.

Borisova Gradina Park. Sofia’s oldest park, dating from 1884, Borisova Gradina offers a variety of terrain along mainly forested, undulating paved and unpaved paths. There are two stadiums with tracks and two small lakes. This park is near Sofia University, Parliament and major hotels. Many km of paths. A perimeter loop. is ~3 km.

Loven Park. Just south of Borisova Gradina and the television tower, many more km of paths in the Слънчевата градинка around the National Tennis Center, and then Loven Park (‘Hunting Park’), which is less developed, featuring mainly flat forested, trails.

South Park. Probably the most popular park it Sofia, this lovely park has mainly paved paths and features great views of Vitosha Mountain to the south. The terrain on the eastern side of the park is hilly! It’s ~2.5 km north-south. A perimeter loop is 4.2 km.

North Park. Nice park in the Nadezhda neighborhood, with forested trails and a pretty lake in the middle. One could do a loop of ~4 km.