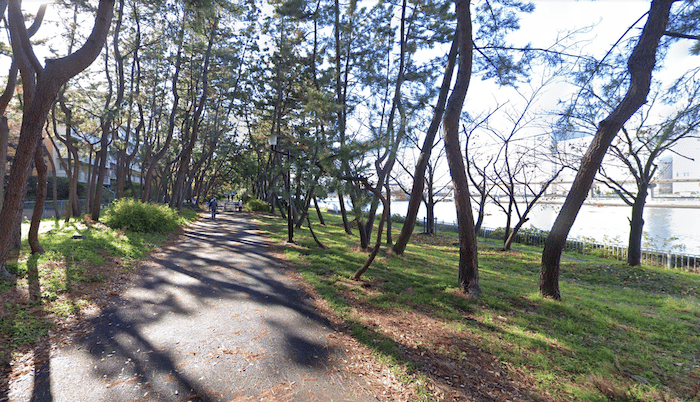 Tokyo is served by two major airports: Narita and Haneda. Narita is larger and better known, while Haneda is closer to the city and is growing in popularity. The running options near Narita aren’t very good. If you have the option, try to use Haneda — it has a scenic location on Tokyo Bay, and is near Tokyo Disneyland. There’s also some decent running not far from the airport, and in proximity to some of the local airport hotels.

The best place to run near Haneda is Oi Wharf Seaside Park, which is in Shinagawa City just north of the airport. There are paths along a narrow river that leads into Tokyo Bay, and other interior paths through the park and passing numerous athletic facilities, including a running track, tennis courts, and some nice open spaces. It’s a combination of open and wooded, with some good shade options. Overall, a loop is a bit over 5 km.

If you stay one of the Shinagawa City hotels, use the Kamone Bridge (pedestrians only) or the path along the Katsushima Bridge to get to the park.

Note there are a number of other small parks near the airport with nice views, but none that are sufficient for a run of decent length.