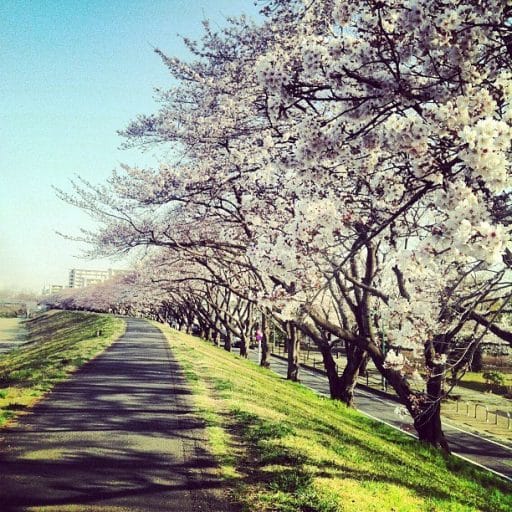 The Tama River trail is one of the best ways to go on a long, uninterrupted run in Tokyo. Though not right in the central city, it is easily accessible along most of its length via subway. This trail is also popular with cyclists. One can run all the way from Fussa station line in the north, heading south toward the sea. The paved path parallels the river most of the way, slightly above the river. There are some sections where a gravel trail runs level with the river, and some sections where there is a path on both sides of the river.

Great place to run! I did about 17 km from Futako Tamagawa upstream to Tama Suido (the green arch bridge), over the river and back on the other side.
In some parts you can get down close to the water and run along rambling gravel/dirt paths, and in other places there’s a sealed trail higher above the river. Quite wild and peaceful — on the Sunday I went, there were kids playing soccer and baseball, families having picnics, blokes fishing in the river, people collecting plants (not sure what!), and one very good saxophone player under a bridge. I went in late January, so it all looked pretty bare and wintry, but there are lots of cherry trees — it must be quite something in spring.
Futako Tamagawa has a nice park with space to walk and sit outdoors, and quite a fancy shopping centre with lots of places to eat or get coffee.