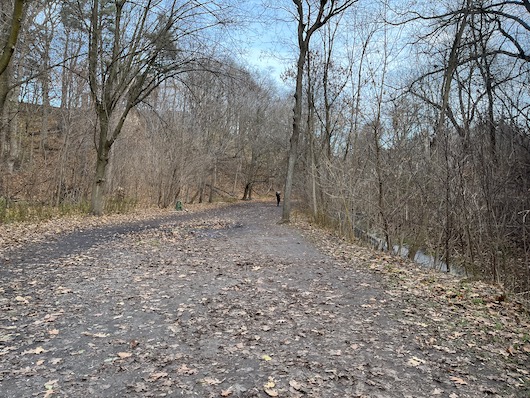 For those who’d like some gentle trail running, woods, and even some hills, we recommend the series of trails that run through a ravine in the northern part of Toronto. The path runs for nearly 4 km between Sunnybrook Park in the east to the Alexander Muir Memorial Gardens at Yonge & Lawrence in the west. The mainly dirt path runs through the bottom of a ravine, connecting several parks, and is primarily wooded. There are some roots and rocks, and also some stairs. There are also hilly side paths and stairs connecting the ravine to the street — an opportunity for some hill work in otherwise flat Toronto!  Note: can be muddy/slippery, and not maintained in winter.

Add-Ons: At Sunnybrook Park at the east end, connect to the extensive linear park trail that runs between the Botanical Gardens south, connecting to the Lower Don Trails. At the west end, there’s a nice residential area east of Yonge (Lawrence Park neighborhood).