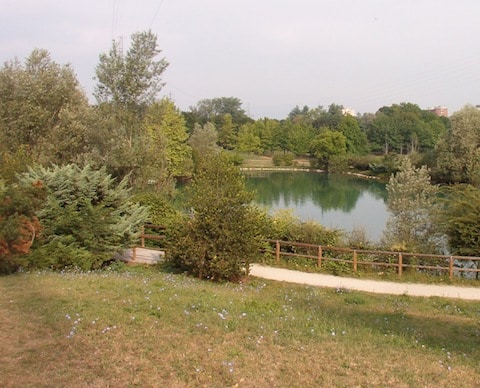 This is a nice run with lots of options  for variation and for you to create your own route. Our route map is meant as a guide to put together a linear park loop of nearly 10 km.

Parco Public Pellerina is located about 5 km west of Turin City Center. It’s a popular public park, with numerous paths and other athletic facilities — a pool, gorgeous red clay tennis courts, and numerous fields. One could put together a loop of ~4 km around the park’s paths, which include some along the river and a couple of small lakes.

For a longer, linear park run, continue along the Dora River, through Parco di via Calabria, crossing Porto Potenza, into Parco Dora. This park is built on former industrial wasteland, and is more open, with modern structures and wide paths. One can run here for 1 km on the northern side of the Dora River, then cross over to the southern side, passing the Science Museum. Instead of a there and back, add to the loop with ~1 km of paths along the river, just south of the Hospital Amedeo di Savoia. In all, one could make this a ~10 km run.
Share:
Essentials
Route Map