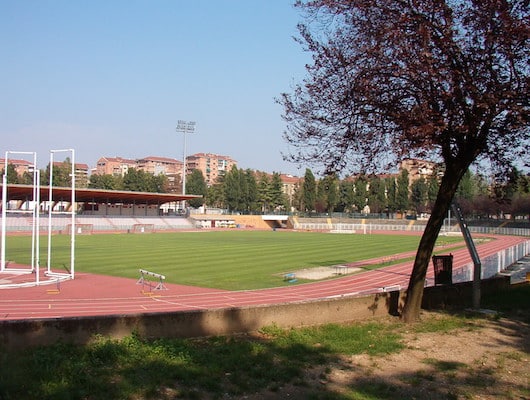 For an ‘athletically minded’ run, we recommend a route combining Ruffini Park and the Olympic Stadium complex just southwest of central Turin. Ruffini Park is a combination park and recreational complex, featuring tree-lined paths, an arena, and a small stadium with a publicly accessible running track, athletic fields, outdoor fitness machines, and tennis courts. One could do about 1 km within this park, or enjoy the track.

For a good 5-miler, we recommend running over to the Olympic Stadium complex, about 2 km away. There are numerous streets that can be used, but we recommend using Via Vincenzo Lancia at the north end of the park to get to Corso Racconigi, which is a wide, busy street but has a grassy median with a bike/running path. Run for 1.5 km south, into Cavalieri di Vittorio Veneto Park, which is a large city park with numerous paths, fields, basketball courts, a running track, and sculptures. Take a jaunt around the 1933 Olympic Stadium, home of Torino FC. For the return, take Corso Sebastopoli, passing through Parco Rignon, and then Corso Siracusa.

Note: Transport access is a bit better to Veneto Park, so the route could be started there.

Scenic path along the Po River, with views of important Turin sites and the mountains in the... more...