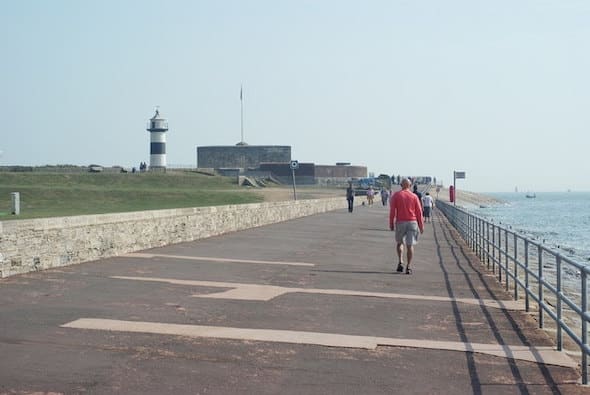 Portsmouth is a port city and naval base on England’s south coast, mostly spread across Portsea Island. There’s some excellent waterfront running in Portsmouth, with options to extend in some nice parks & commons.

Portsmouth Harbour Waterfront. A terrific waterfront run  on the west side of Portsmouth, extending from the Spinnaker Tower for 4.4 miles to Southsea. Great water views the whole way on this dedicated path. Run around the marina, pass the 15th-century Round Tower Fort, and continue along the water, adjacent to Southsea Common. The path — Clarence Esplanade, Eastney Esplanade — turns east, to the end of Eastney Beach (beach isn’t great for running). The full out and back is 8.8 miles.

East Side: Milton Lake, Common, Marsh Tour. On the east side of Portsea Island, there are numerous options. A dedicated path follows right along Milton Lake, with nice water views. The waterfront path then continues off Portsea Island for a 3-mile loop around the Farlington Marshes — really pretty, with great views. Note: Some of the path is a grass surface. So the full route including the Marsh Loop is nearly 9 miles.

Hayling Island: Just east of Portsmouth is Hayling Island, popular for its beach, amusement park, and nature preserve. There’s a very nice run on the Hayling Billy Walking Trail, which goes for 2.5 miles between the Langston Bridge south to near the waterfront. Nice views of the water and the surrounding marshes. It’s worth the extra mile to run on the bridge for nice views.

The signature run in Southampton is a tour of its gorgeous parks, including Palmerston Park and the... more...

This is the Great Runs guide to the best places to run along England's southeast coast --... more...