No Thanks
Lincoln, NE 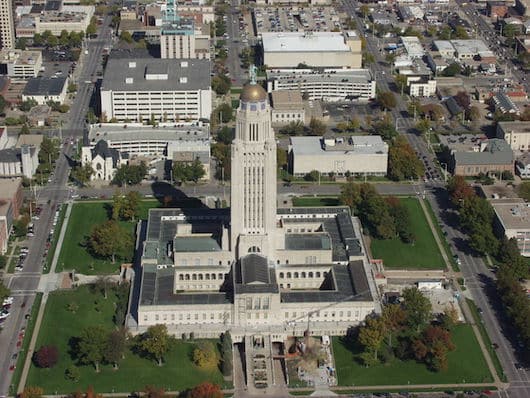 This is a delightful run in central Lincoln, combining the campus of the University of Nebraska, approach to the Capitol, and some attractive residential neighborhoods just south of downtown. We’ve created a straight-shot route from the University to South St., ~3 miles north-south, that can be used as a guideline to create your own route.

At the north end, the University of Nebraska has an attractive campus, with nice pedestrian paths. Be sure to include a lap or two around the running track (next to the stadium, Vine & 14th), and the paths between Vine St. & Q St. north-south and Stadium St. & 16th St. west-east. Then, head south on Centennial Mall, which is a straight-shot approach to the Capitol with its iconic tower (the second-tallest Capitol in the United States!). Do a little loop around the Capitol and continue south, using S 15th St./Goodhue Blvd. (wide, tree-lined street) as an anchor. The Near South neighborhood, between S 13th St. & S 27th St. features many of Lincoln’s grand historic homes, set back on lovely, tree-lined streets.

Add-Ons: At the University of Nebraska end, the Salt Levee Trail is just west, and the Mopac Trail/Rock Island Trail is just east.

Among Lincoln's 134 miles of trails, the Rock Island Trail is one of the best for running.... more...