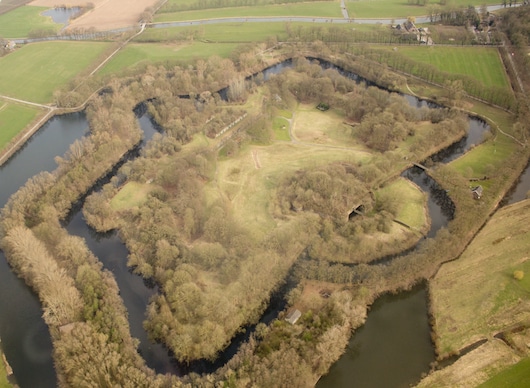 Outside the canal paths, the area around Fort Rhijnauwen and the Amelisweerd National Forest is our favorite place to run in Utrecht. Located a few km east of the city, Fort Rhijnauwen is a 19th century fort that used water defenses to form an ‘island’ fort. A paved 3.5 km path, the Vossegatsedijk, forms a great perimeter loop of the fort.

Adjacent to the fort are the grounds of the Rhijnauwen and Amelisweerd estates, former manors that are now a National Forest. There are gorgeous gravel trails in this area, a combination of paths around the beautifully landscaped estate grounds and some more wooded paths at the western edge of the area. You can create your own route of several km here. We’ve mapped a 5.6 km loop that combines the estate/forest trails headed to the western end, and then returning on a path called Jaagpad, which runs along the Kromme Canal. For a longer run, the combine the fort & forest loops for 9 km, or add on with additional trails in the area.

Add-Ons: Just north of the fort, there are nice paths around the University of Utrecht and the Utrecht Botanical Gardens.