No Thanks
Vilnius, Lithuania 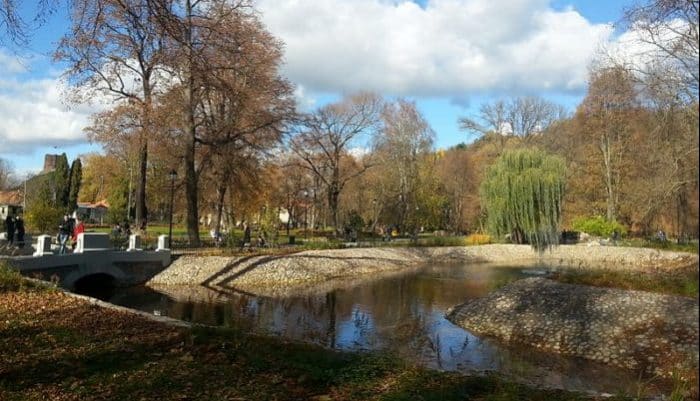 These two adjacent parks east of the city center offer many runnable trails and can be done standalone or in combination. We’ve mapped out a quick 4 km route that captures the best of both parks.  Or you can create your own route/add on to ours. A pedestrian bridge connects the two parks.

Kalnų Park: Just east of the city center, Kalnų Park is a prized Vilnius landmark for its Hill of Three Crosses, which looks out over the city with panoramic views. There are many runnable trails throughout the park, some dirt and many paved. One fun challenge is to run up the paved hill path to the vista, but the scenic dirt paths along the Vilnia River are also nice, and serve as connections to Bernadine Park.

Bernadine Park: Just across the Vilnia River from Kalnų Park, the pristine gravel paths of Bernadine Park are a great addition to Kalnų or a route on its own. One loop around the perimeter is a little over 1 km, but there are lots of interior paths. Don’t miss the fountain at the center, surrounded by gardens in summer and holiday lights in winter. For longer distances, connect to Kalnų via the pedestrian bridge, or head north on the paths surrounding the Palace of the Grand Dukes and Gediminas Castle Tower.

Longer Run: Head north on the paths surrounding the Palace of the Grand Dukes and Gediminas Castle Tower.