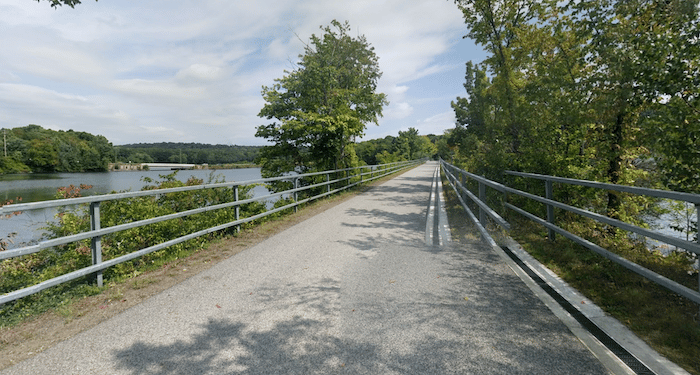 At the northern end of the North County Trail, runners can choose a section of two additional multi-use paths that extend into Putnam County. They’re part of the 750-mile Empire State Trail. North of Baldwin Place the path continues as the Putnam Trailway for 11.4 miles to Brewster. It’s 8 miles to Carmel and 3 miles around the eastern side of the Middle Branch Reservoir, ending in Brewster. It’s a mainly wooded path. Highlights include the area around Lake Gleneida (mile 7) and the Middle Branch Reservoir section (miles 9-11). Once in Brewster, you’re officially in Putnam County. TRAIL INFO & MAP

After a brief road connection, pick up the Maybrook Trailway in Brewster, which goes for 25 miles between Brewster & Hopewell Junction. This is a new, beautifully paved trail, in Putnam & Dutchess counties, opened as a key connection in the Empire State Greenway. The flat trail follows a former freight rail corridor, and it’s mainly wooded terrain, with some sections passing wetlands, a couple of small waterfalls, farm fields, and some ponds. Headed north, it’s  5 miles to Ice Pond, 10 miles to Holmes, and then there’s a nice 2-mile stretch along Whaley Lake (miles 12-14). At the 16-mile point, the trail turns west for the final 8 miles to Hopewell Junction. Note that the first half of the Maybrook Trailway is a gradual uphill, and the second half is a gradual downhill.