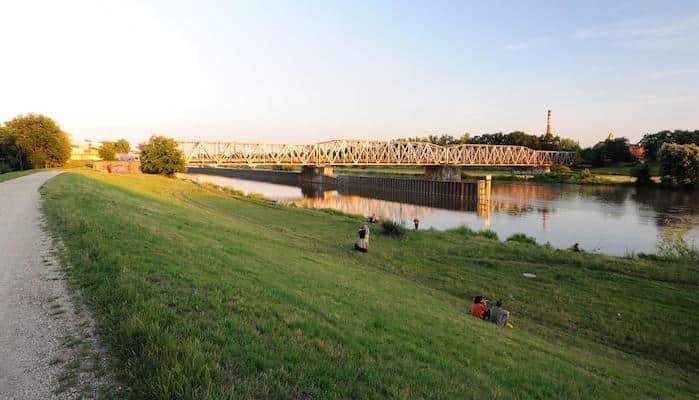 The Stara Odra is one of the main river branches running through Wrocław. There are numerous running options along the gravel canal paths, from long, quiet waterfront stretches to centralized city loops. We’ve mapped out two popular options below.

Three Bridges Route: This 7 km loop option, favored by those close to downtown Wrocław, follows the levee of the Stara Odra in a triangular route between the Szczytnicki, Warszawski and Jagiellońskie Bridges. From the Szczytnicki Bridge, just west of Szczytnicki Park, runners can pick up the path on the east bank of the river and head north. At the corner with Kanal Powodziowy, turn RIGHT, then cross over the Jagiellońskie Bridge. Follow the path west along the canal to Warszawski Bridge, then turn LEFT to head south along the Stara Odra back to Szczytnicki Bridge. The loop can also be run in reverse.

The Pasterska: Though somewhat more out of the way than the Three Bridges route, the Pasterska, or Hatzfeld Weg, is a pleasant pathway of stone pavers running between the Stara Odra and the Miejski Canal. Starting from Warszawski Bridge, the path goes west for about 2.5 km. It can either be run as a 5 km out and back, or added on to the other Stara Odra path.