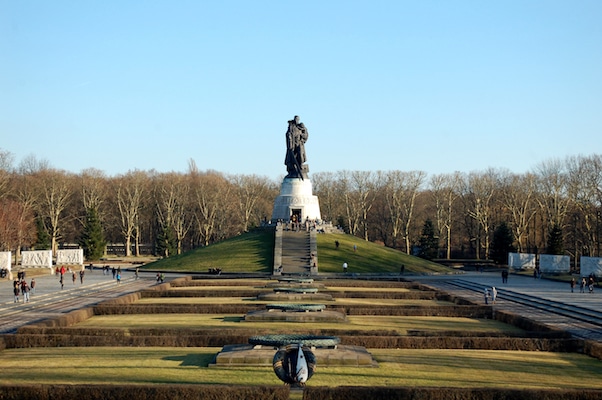 Treptower Park is a good anchor point for running in in east Berlin. The pleasant park has numerous paths that can be combined with a run along the Spree River. Our route starts at the S-Bahn station, through the Treptower Park trails and the Planterwald nature preserve. An important landmark is the Soviet War Memorial, which commemorates the 80,000 Soviet soldiers who were killed in the Battle of Berlin. Then loop back along the river paths, viewing remaining elements of the Spreepark amusement park, which operated from 1969–2001. Our run is 5 miles. For a nice add-on, cross the bridge over the river and run along Spree River It’s a This is mostly waterfront running, with some 7.5 miles RT possible. A 3.5 mile loop would be the finger out to Friedhof Alt-Stralau. Nearby is the massive Arena Berlin, and good running options along the Landwehr Canal trails.
Longer option or separate run: Over bridge and along Spree River paths
Share:
Essentials
View map: 5.4 mile option View map: 7.5 mile option