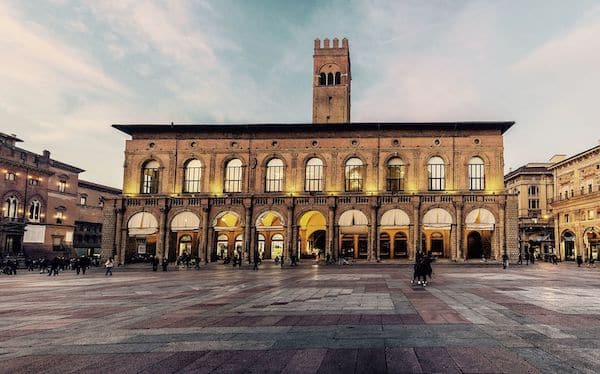 This 7.5 km ‘runseeing’ tour incorporates many of the important sights of Bologna’s historic section, which sits inside the SS64 and SS9 ring roads. Several remaining old gates (portas) on those roads mark the entrance to the city. We’ve attempted to design a route that is as easy to follow as possible, though you might add or modify by weaving through the center’s narrow streets and alleys (go when it’s quiet!), where you’ll see more of Boligna’s famous arcades (38 km in all) and towers.

Start at the iconic Piazza Maggiore, and run east along Str. Maggiore for 1.3 km to the Porta Maggiore, passing two of Bologna’s towers (24 remain of the original 100), the Basilica Santa Maria, and Palazzo Ercolani. Turn RIGHT on Via Fondata, then another RIGHT on Via Santo Stefano for 0.8 km, passing the Zani and Vizzani Palaces, to the Piazza Santo Stefano. Head east on Via Santa Margherita for 0.5 km to the Palazzo Belloni, turning RIGHT on Via de Gombruti, passing the Basilica di San Francesco (built 1263) and the old Synagogue to reach the Graves of the Glossatori. The next section is a jaunt passing palaces and parks. Turn LEFT on Via S. Felice, passing the Palazzo Pallavicini art museum, then RIGHT on Via dell’Abbadia, to Via Riva di Reno, to run through the September 11 Park. The Modern Art Museum is located at the northern end of the park, where you’ll head east on Via dei Mille to Montagnola Park, a scenic 19th-century park with an ornate staircase & the remains of a 14th-century castle. Do an 0.5 km loop around the park, exiting and heading south on Via Federico Venturini, to the Finestrella attraction, returning to Piazza Maggiore using Via dell’Indipendenza.

Add-On: To add another 1-2 km, explore the buildings of the University of Bologna — the oldest continuously operating university in the world. It’s in the historical center — use the Porta San Donato and run down Via Zamboni. Also,

A unique run to add to your bucket list -- the longest covered arcade in the world!... more...