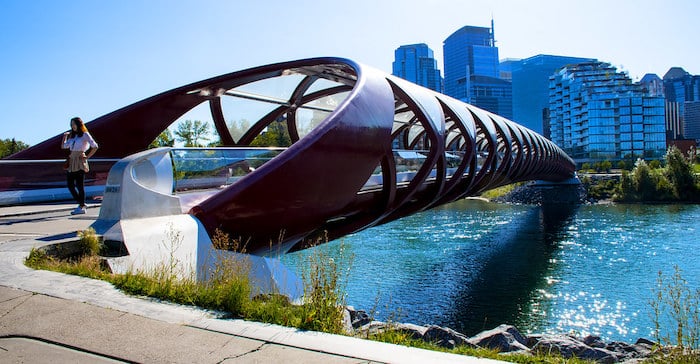 The Bow River Pathway is one of the the signature running spots in Calgary. Overall, it consists of some 48 km of paved path along and around the Bow River, connecting to numerous parks and other trails. The path is park-like nearly the entire way, mostly open type terrain with a few wooded sections.

The western end of the Bow River Pathway starts at Bowness Park and travels east, connecting with the Prince’s Island Park in the centre of Calgary. It then continues east to Fort Calgary, crosses the Elbow River and continues south to the Inglewood Bird Sanctuary and then to Fish Creek Provincial Park. In sections, there are paths on both banks of the river. There are also numerous tributary trails and other park paths which can be added. There are water views a good part of the way. We’ve divided the route into western and eastern sections, which can be combined.

Western Section: Downtown to Bowness Park. This section is up to 17 km one-way. From Eau Claire Park downtown, head west, on the north bank of the river. It’s 4k to Crowchild, 6k to Point Mckay,  12k to Dale Hodges Park, and 15k to Bowmont Park. There, an add-on path heads for 1.5 km north to Silver Creek Park, or continues south to west to Baker Park/Bowness Park.

Eastern Section: Downtown to Cranston. This ~30 km section follows the Bow River east from downtown, crossing the Elbow River, and then heading south through to Cranston. It’s mainly open terrain, with a few wooded sections. The first 5 km are east along the north bank of the river, then turning south just past the Calgary Zoo. The path then proceeds through a series of parks and preserves: Inglewood Wildlands (km 7.7); Refinery Park & Beaver Dam Flats (km 11), Carburn Park (km 15); Douglasbank Park/Fish Creek Provincial Park (km 21-24); and Rotary Nature Park (km 28-30). There are numerous opportunities to add trails in the parks along the way, with additional options in parks on the west bank. Nearly the entire path is through parks. About 1/2 of it is alongside the water.

Among the largest urban parks in Canada, stretching 20 km from west to east. There 30 km... more...