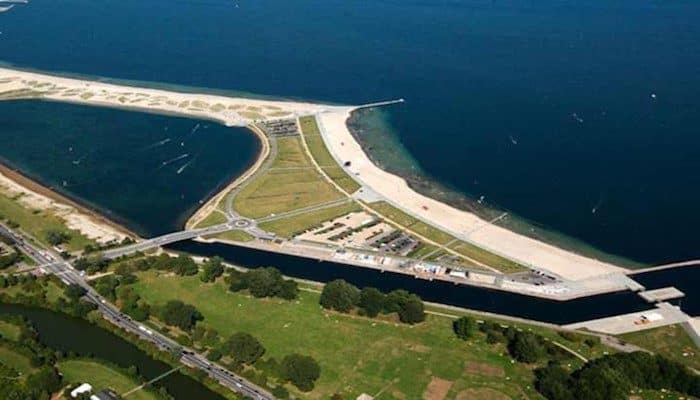 East Side: Amager Strandpark. This area is along the promenade of a 4 km sandy man-made beach on an island, with a lagoon, and several opportunities for swimming & water sports. Start at the Amager Strand metro stop. Cross a small pedestrian bridge over to the island. Take a left to run along the paved promenade, to the tip of the island, about 1 mile. The Amager Hegoland is a public swimming area. Return along the boardwalk, continuing past the pedestrian bridge to Amager Strandpark, where the beach-side promenade begins. Continue along here for about 1 km, then cross a bridge over the water and turn right, making the return to the start by keeping the Tiøren park on your left and canal on your right. A nice detour is Kastrup Sea Baths, a public swimming pool. The final km is along the Amager Strandvej, which as a separated path for running/walking.

Amager Strandpark is home to Parkrun, a free group 5k held every Saturday morning. You can see the course map and learn more here.

West Side: Kalvebod Fælled & Vestlige fugletårn. On the west side of Amager, there’s very scenic running in the Kalvebod Fælled nature preserve. A highlight is the nearly 11 km of scenic waterfront running along the bay separating Amager & Zealand islands. The path, called Vestlige fugletårn in parts starts just west of the Royal Golf Center, and heads south for several km to a numerous scenic spots and a bird watching area. ROUTE MAP

There are also several km of interior paths around the wetlands of the nature preserve. Create your own route here! You can connect to those paths from the western waterfront route at Byskoven, Øen i Birkedam, and at the southern end of the path around Ullerupdiget.