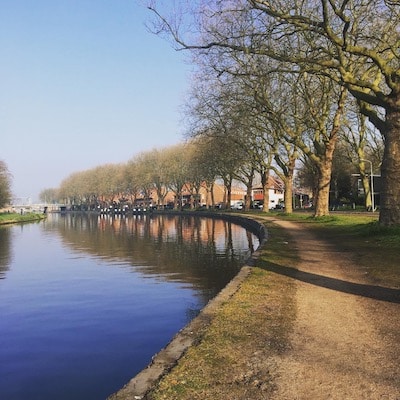 Delft is a canal-ringed city that sits between Rotterdam and The Hague. It has a charming historic center. There are some terrific options for running in Delft, including routes showcasing the canals, several parks, and surrounding forests and farms. There are two good canal-centered running options:

Main Canal Route (Delftweg). Starting at the Oostpoort city gate, which was built in 1400, one can run along the canal as far as The Hague, which is just over 8 km. It’s a mix of gravel paths, bike paths, and roadside sidewalks, but there are good pedestrian options and water views for nearly the entire 8 km distance to The Hague. You could run one way and take the train back. It’s ~5 km to Rijswijk, which makes for a 10k out and back. For a nice side jaunt, Elsenburgerbos and Wilhelminapark are adjacent to the canal.

Side Canals & Parks. We’ve also mapped another 5k route exploring some of the side canals and small parks in the Voordijkshoorn area. Start in Wilhelminapark (the small one), then run along the path alongside the Buitenwatersloot canal,  through Henry Dunantpark, and then enjoy paths around the through a canal-ringed Hof van Delftpark. Continue north along a bike path, then head RIGHT (east) along Kerstanjepad, following the bike path paralleling Pr. Beatrixlaan.